My World's on Fire; How 'bout Yours?


The American West is burning. Strangely, this is to some degree normal. Range fires and forest fires, usually started by lightning, burned large dry patches of the west every summer before Europeans arrived, maybe even before people arrived.

But it's getting worse.

Human negligence has long contributed to the problem through untended campfires, dropped cigarettes, fireworks, and heat and sparks from machinery.

But a more collective form of human negligence is increasing the problem--global warming is becoming a big factor. Cold places like the Arctic and Antarctic are getting warmer. Wet places like Ireland are experiencing unusual dry spells.

Part of our fire problem is heat; summer is longer and hotter now. But the biggest factor is drought. Much of this country has always been a desert to begin with, but the dryer the vegetation is, and the sooner the landscape turns from green to brown, the more susceptible to fire everything is.

We had almost no snow and until March last winter. Little rain has fallen since. The reservoir  above our neighborhood is the lowest I've seen it in forty years.

California fires dominate the news every summer but we have them throughout the Rockies too. On dry years like this, they start before July and burn constantly well into the fall.

I haven't personally seen any of this-year's fires. Though the mountains above me and the equestrian park next door often burn, we have been lucky so far.

We did have family camping plans cancelled because the area where our reservations were caught fire.

I'm happy to say that most of my neighbors observed the fireworks restrictions this year. I didn't see anything lit up near my home on the 4th or the 24th. The fact that a nearby home was severely damaged last year may have helped people realize that the restrictions are necessary.

Though we haven't seen fire, we are breathing the smoke. Every day for the past two weeks the haze has increased. The Salt Lake Valley is a huge bowl that seems to suck in and store pollution, especially when the air is relatively still in summer and winter. What weather we get comes through California and brings more smoke.

Today (Thursday) is overcast and there are predictions of scattered showers, which are good, and thunderstorms, which are bad. So far the clouds are high and pale, so I'm not counting on either, but the lower temperatures are appreciated.

There is an odd silver (or golden) lining to the smoke. Sunsets are more colorful. 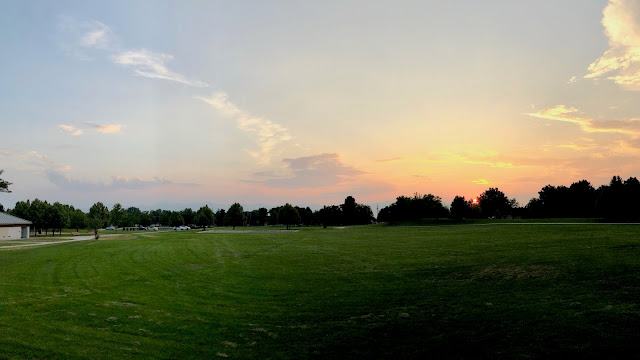 THE PODCAST is about two perfect summer days. It is also about worshipping in nature instead of formally in church. As a church goer, I can see the appeal of Emily's argument. Unfortunately for Dickinson, neither worshipping in church nor in her own garden eased her anxiety about the afterlife.

There may be a solution, or at least a diagnosis coming for my arm and shoulder pain. My rheumatologist signed me up for an MRI this coming Monday night.

I was surprised because I assumed almost all pain fit into either the RA or fibromyalgia slots, for which I am already taking whatever drugs are recommended. I'm not sure what can be done about pinched nerves,  or alien parasites, or whatever else may be causing the pain, but it is nice to be taken seriously.

Due to the arm pain and the blues they cause, I've been working on fiber prep and have four colors of yarn blended and ready to spin. 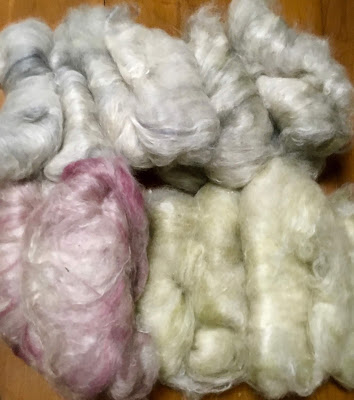 I also have two scarves finished, the first made on the loom during Shakespeare when I couldn't handle not knitting. I'll probably keep it because the ends are too raggedy to put up for sale and because it''s very neutral. I'm working on a sweater for myself from the remaining recycled yarn--using knitting needles. 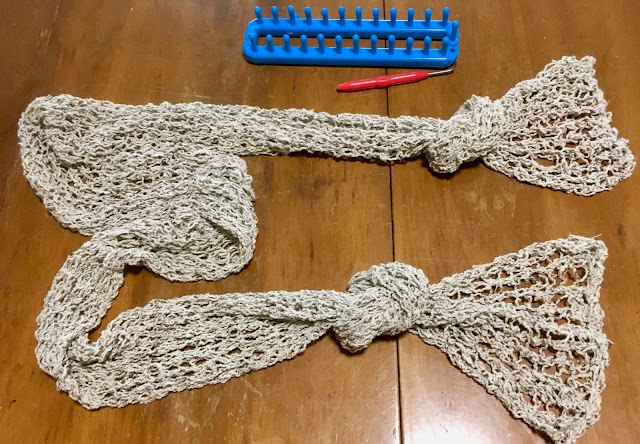 The second,  I feel like I've been working on forever, though I started it on the way home from my vacation. I was getting totally sick of knitting it, but now it is finished, I'm falling back in love. The yarn was spun from a blend of wool, silk, and flax. The color is great. I had initially planned to put it up for sale, but I'm thinking of keeping it now.