I had chosen to spread out processing my photos and memories of travel to enjoy the experience longer.

I should have guessed that politics would make escaping back into the quiet, timeless rocks a psychological imperative. I've spent most of this week agonizing about stolen children. I've written my congressmen and donated some money, but feel mostly helpless.

Asking anything of my very Republican representatives feels increasingly less effective than starting to pray to ancient Babylonian gods.

If you know anyone in power, kick him or her for me. 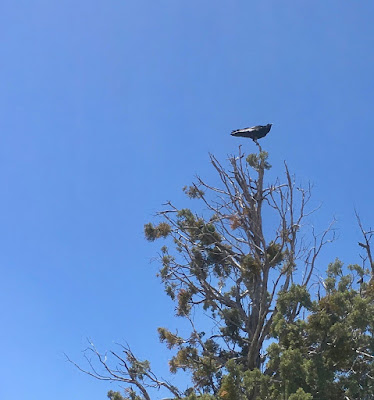 My hurt isn't helping anyone. It's time to set away for a few minutes.

So I'll call on my travel spirit guide, in this case the raven I managed to photograph at the Grand Canyon, and try to focus on the rocks, because traveling the four corners is all about the rocks.

Rocks lend a different perspective to our brief lives. Geological time is vast and hard to comprehend, but the striking layers of rock all over the Colorado Plateau make it impossible not to believe in an incredibly ancient earth upon which we humans are relatively recent inhabitants.

The oldest rock I encountered is a relatively recent arrival. 50,000 years ago, a meteorite struck a flat, desolate part of Arizona, creating a mile-wide crater over 550 feet deep. Bits of that meteorite are scattered all over the desert floor and on sale for as little as $3 at the gift shop, but the big chunk on display is a piece of iron and nickel believed to be over three billion years old. Astronomers assume these metallic meteors were formed at the same time as the planets in our solar system. 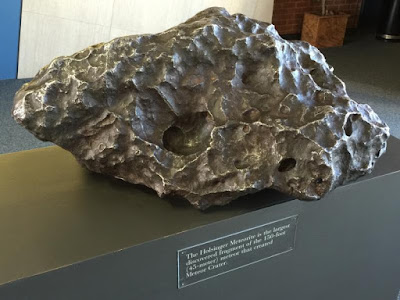 The crater was formed before the earliest traces of humans in the southwest, but even if people were in the region, it is unlikely anyone would have been harmed. Meteor Crater is on one of the most barren pieces of land I've ever seen.

Our guide said that natives knew about the crater and hunted near it, leaving arrowheads, but they have found no other sign of habitation.

White people first bought the land as a mining claim, hoping to find a huge meteorite that had actually been burned up in the atmosphere and vaporized on impact. Later, the land around the crater became part of a vast cattle ranch. It has to be vast because the unpromising vegetation can support about one cow for every fifty acres.

The crater has remained in private hands and the museum is privately developed, so we didn't know what to expect. Frankly, the web page and the faded road signs leading to the crater led us not to expect much.

We were pleasantly surprised. There is a Subway restaurant on site, so you can avoid heat and starvation (if you can afford it.) The museum is up to date and interactive with lots of information about the history of the crater and of the science done there.

It took the lifetime work of more than one geologist to prove that this crater, in an area dotted with volcanic activity, was actually caused by a meteorite.
The clues these scientists used made it possible to identify other meteor craters around the world and contributed to information used to study craters on the moon and Mars.

Tourists are no longer allowed to hike into the crater because the owners got tired of paying search and rescue to retrieve victims of heat stroke and sprains. Erosion is a problem too. Wind will gradually fill the crater with sand, but hikers were speeding up the process.

We hadn't planned to hike anyway. The mid-morning heat was bad enough that we weren't sure everyone in our tour group was going to survive half an hour on the crater rim listening to a guide. If you go, sunscreen and hats are a must. 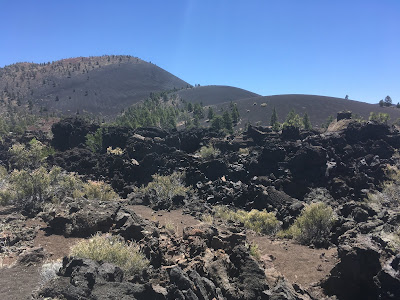 The newest rock I encountered was less than a thousand years old. (I miss-remembered and told my parents about 200, sorry.)We found it  almost on accident. There was time between Meteor Crater and a Lowell Observatory visit later in the afternoon, so as we drove back to Flagstaff, I looked for other points of interest on my phone.

This brought us to Sunset Crater Volcano National Monument. This is the most recently active volcano of many in Northern Arizona and has become a place to study how nature comes back after the total devastation of an eruption. Apparently it took 400 years for plants to start growing on the lava field. Now there are pine and aspen looking very out of place on this desolate landscape.

People were living in the area at the time. In fact dendrochronology of logs in buried pit houses helped scientists date the eruption. No human remains were found. It is assumed people had enough advance warning and perhaps passed down knowledge of volcanoes, so they moved to other sites (one of which we visited) before their farms were covered by the lava flow

No one is allowed to climb the cinder cone, but there are several trails. We only had time for one and plan to go back and spend more time. 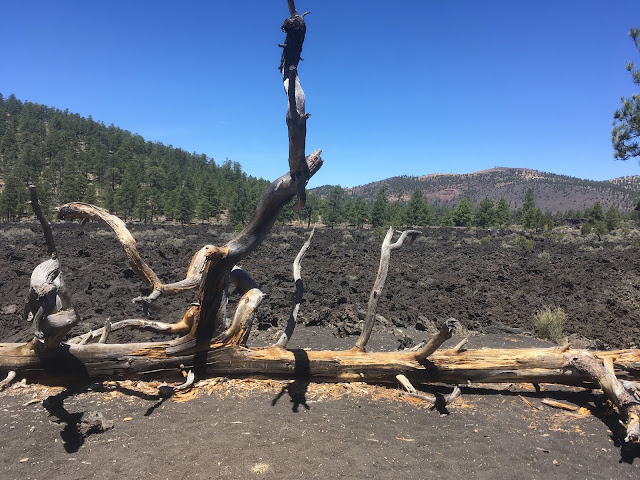 The rock that drew us south in the first place is the Grand Canyon, which in addition to being beautiful is a textbook of geologic time. The Colorado river started cutting through the rock "only" five or six million years ago--Still before people were known to be in North America. But it cuts down through the ages--layers of sandstone put down by the sediments of lakes and seas. The lowest point of the canyon is made of hard igneous rock possibly 2 thousand million years old. I heard several fellow tourist exclaim in disbelief that there was an ocean there, but the evidence is written in stone.

The canyon is impossible to capture in photographs, but I give you my attempts. These were taken from the south rim on an increasingly windy and increasingly crowded June day. 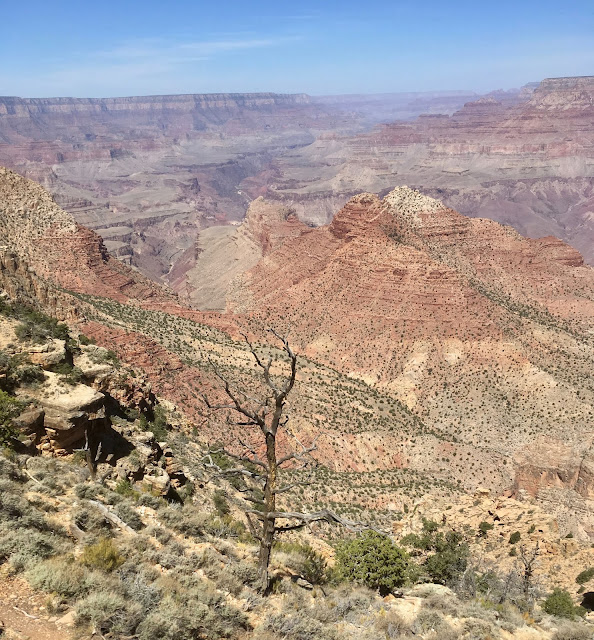 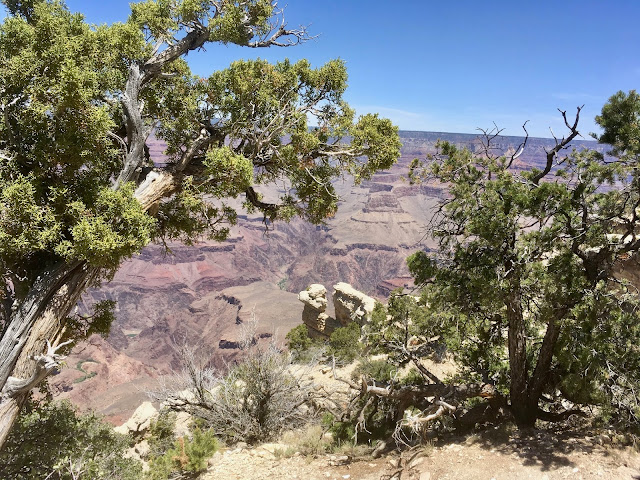 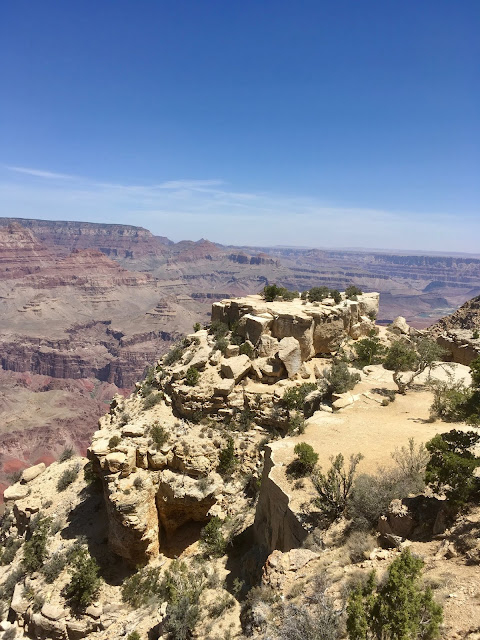 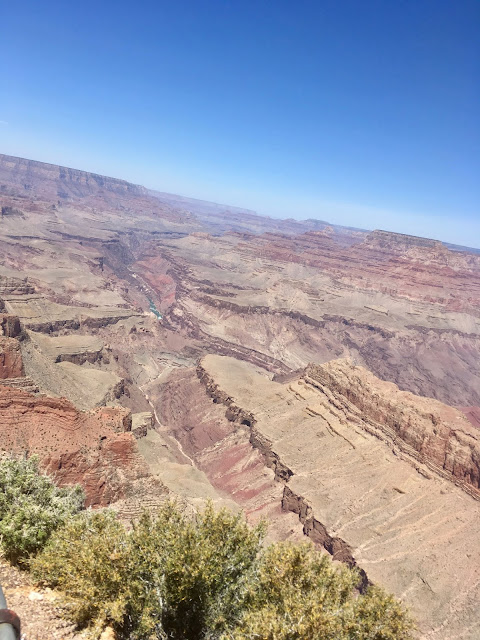 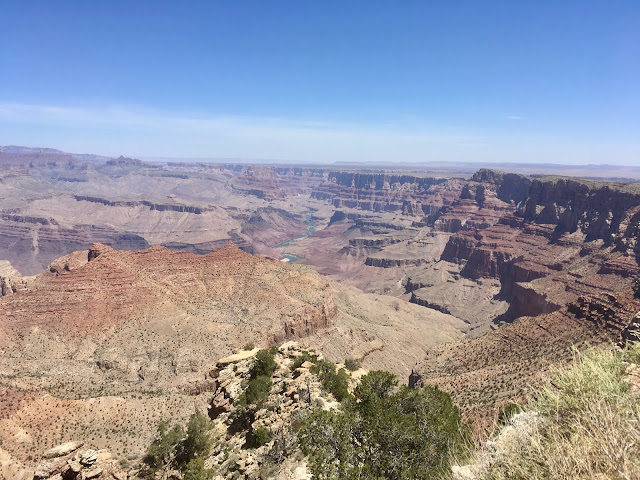 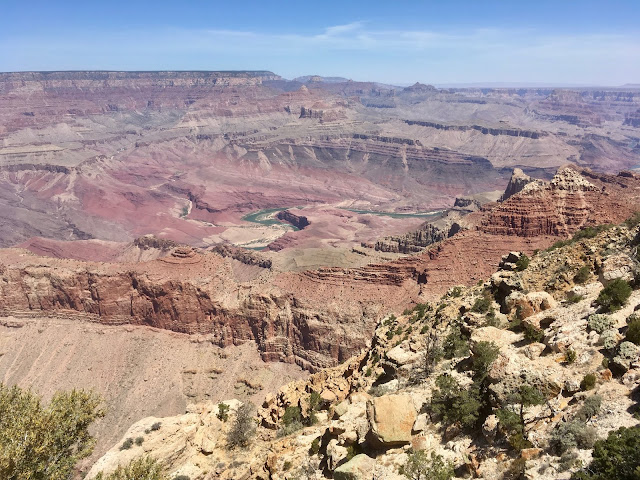 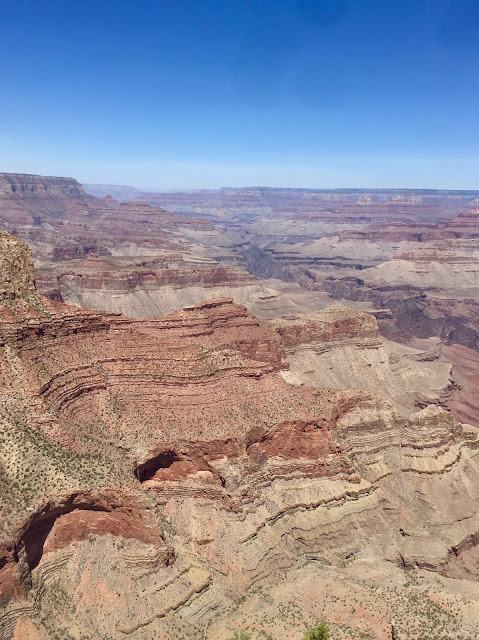 If there were fewer people we would have stayed longer. I feel like I could spend hours leaning on a guard rail and absorbing the vastness of the canyon, but we need to find a time of year and day of week that allows for a little meditation.

Before I return to the present, I need to leave a strong recommendation for the Museum of Northern Arizona. It had the best information on the geology and people of the area. We will be back there when we have several hours to learn.

THE PODCAST this week is on a poem I read while traveling. It describes how a sunset transforms an ordinary village into shades of red and gold. The red and gold struck me and I tried and failed to imagine Emily Dickinson's reaction to the four corners area. 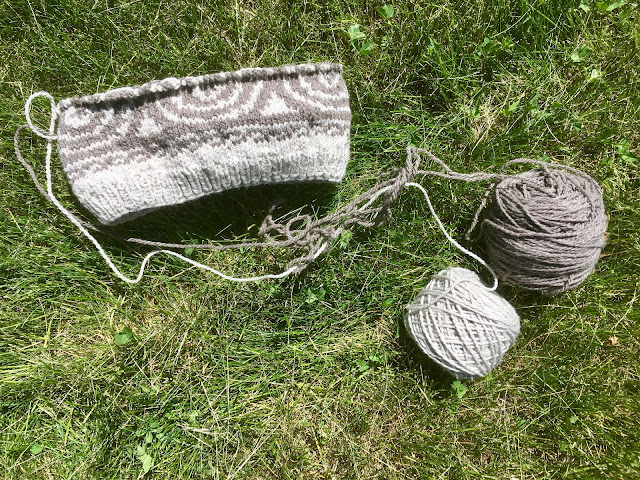 THE KNITTING is a commission piece ordered while I was away. I made a false start with the colors reversed, but I'm well underway now. These subtle natural colors remind me of some of the pottery I saw. Pottery-inspired hats may be made from the leftovers. If you want me to make something for you, communicate through my shop.
Posted by Unknown at 2:38 PM