From Eden to the Desert 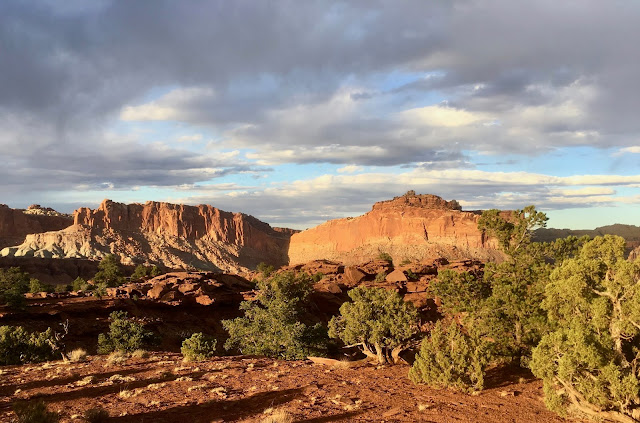 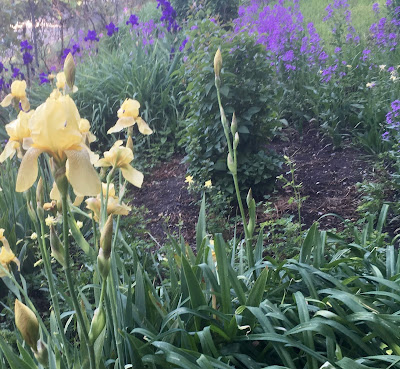 The day before our trip, I don't want to leave. This is the most beautiful time of the year. Everything is green and blooming. My yard is polka-dotted with patches of deep purple irises. Dad's garden is plowed and planted, with the first shoots of plants coming up. My roses are warming up for their best performance of the year.

And I am leaving tomorrow for the desert. I can only imagine a fraction of what the settlers of the four corners region felt when called to leave Cedar City, already a well established mountain town, to start all over again in a desolate place. I am going for four nights, in luxury, for fun. They left forever to face hardship and danger. 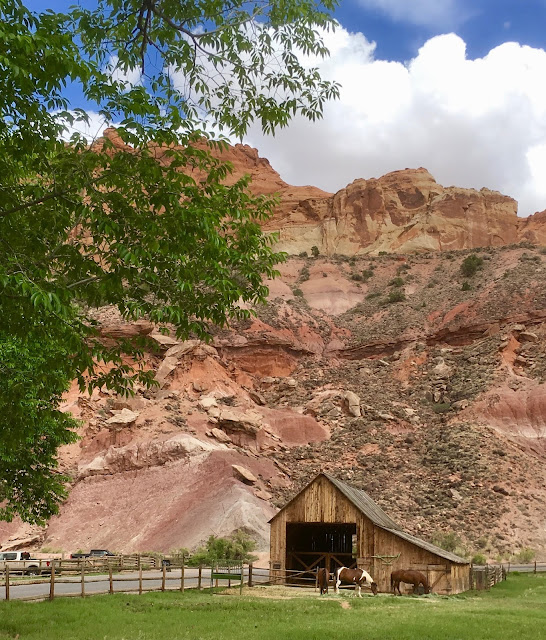 Now, back from our trip, I can report happily that I faced no hardship or danger. It was thoroughly delightful.    But I am now paying the price, which is why this blog is half a week late. I played for five days and will now need to rest for the better part of five days before I'm back to my usual level of (dis)ability. 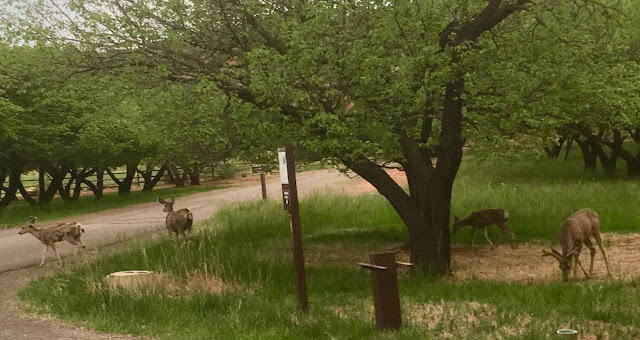 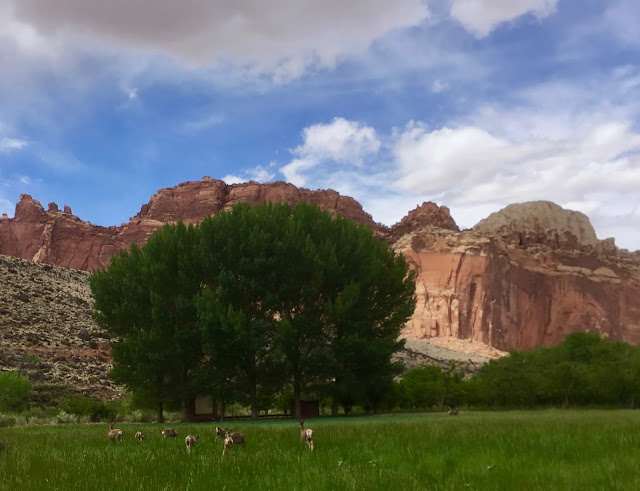 The campground and the little towns near it have plentiful irrigation from small rivers, so the orchards, yards, and fields are well-watered. In the campground we saw a variety of birds, several herds of deer, a rabbit and some marmots. A ranger talk one night assured us that we were also being watched by mountain lions. 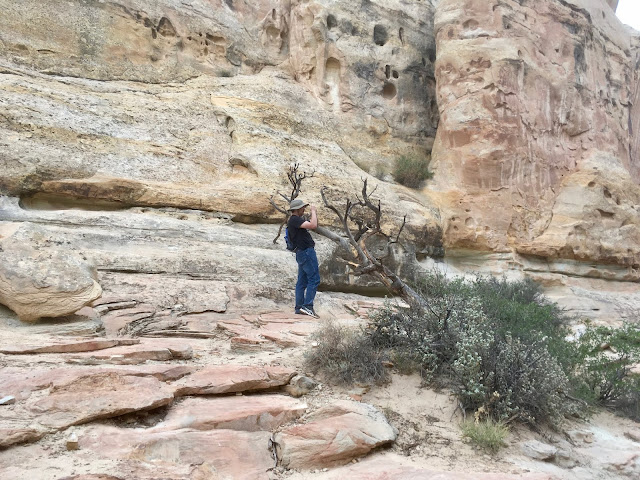 Away from the river, everything was dry, but not as dry as in southeastern Utah, the four corners area settled in The Undaunted. That corner of the state was declared a natural disaster due to prolonged drought. Ranchers are currently trucking in water to keep cattle alive.

Monday, we drove and set up camp, then everyone else went on a tough hike while I took a small ride around the campground on my bike. 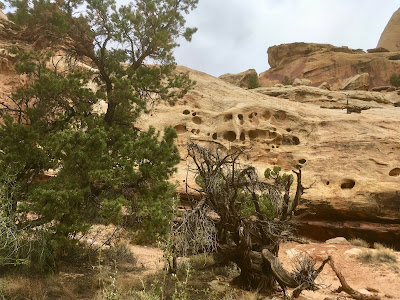 Tuesday was my "long" (2 mile round trip) hike to a natural bridge. It was fun redrock hiking with lots of variety in the terrain. 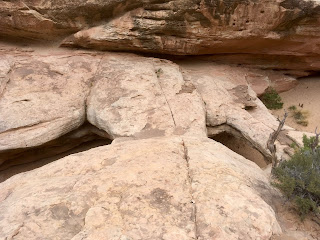 We followed the Loa Elementary kindergarten class up the trail, which is a good sign about it's difficulty, but also of the bravery of Loa Elementary teachers and parents. I would have taken my own children at any age, but would have hesitated to take a class of kids anywhere with so many cacti and good places to fall.

If you know anyone in this picture, let them know so I can get their permission. I don't think any of the kids are recognizable, but some of the adults may be. 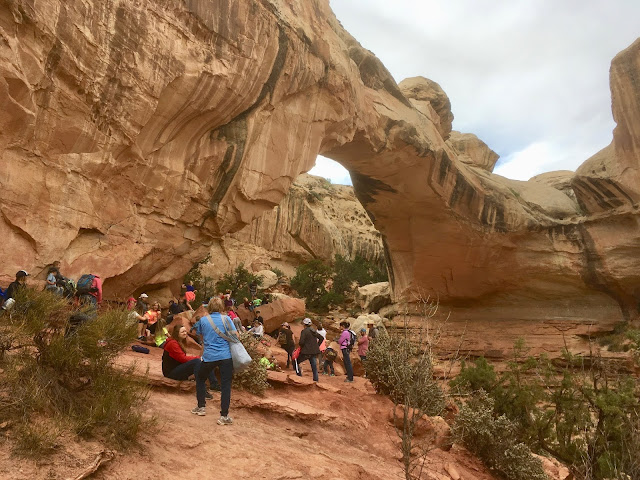 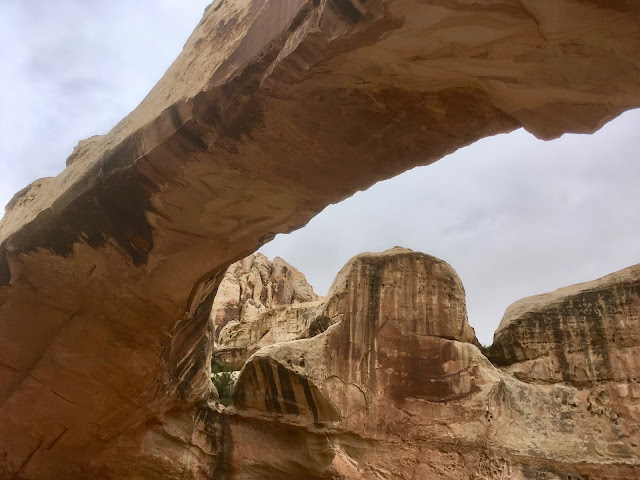 We stopped to look at some pictographs after the hike and I confused my parents by making a fuss over the cuteness of a tent caterpillar. 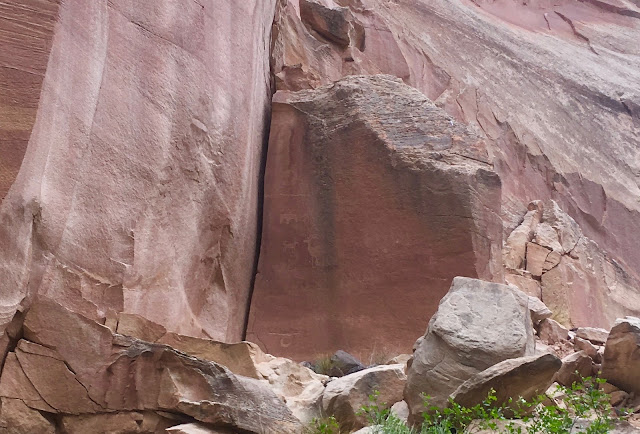 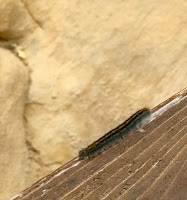 Wednesday morning we drove to a more isolated part of the park. Driving on dirt back roads is always an adventure, such an adventure that Dad always carries two spare tires. He started doing that after getting a flat in the middle of nowhere and realizing after changing the tire that he no longer had a spare. Luckily, this drive was without incident. 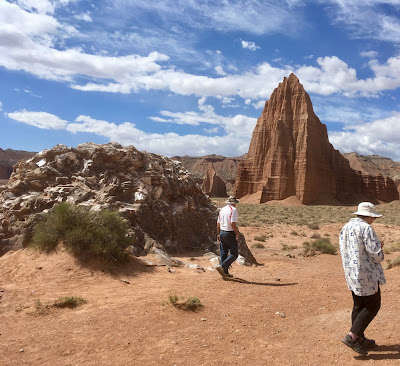 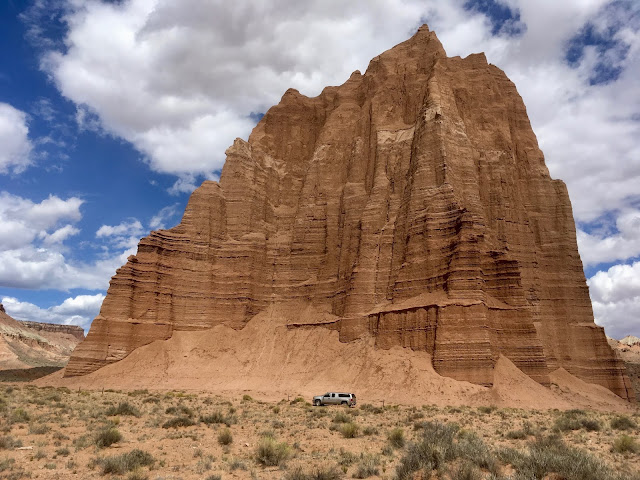 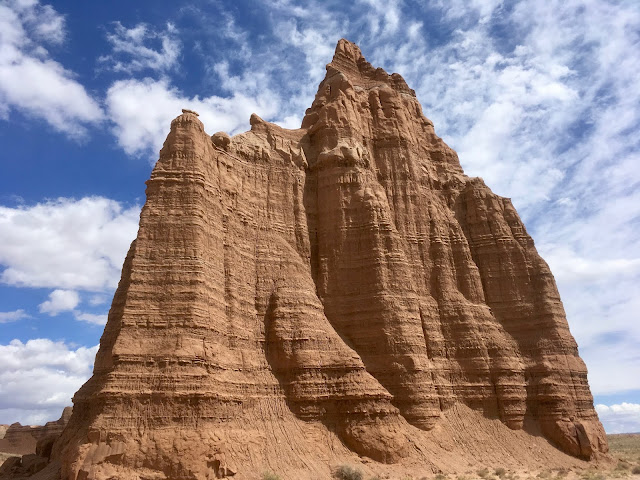 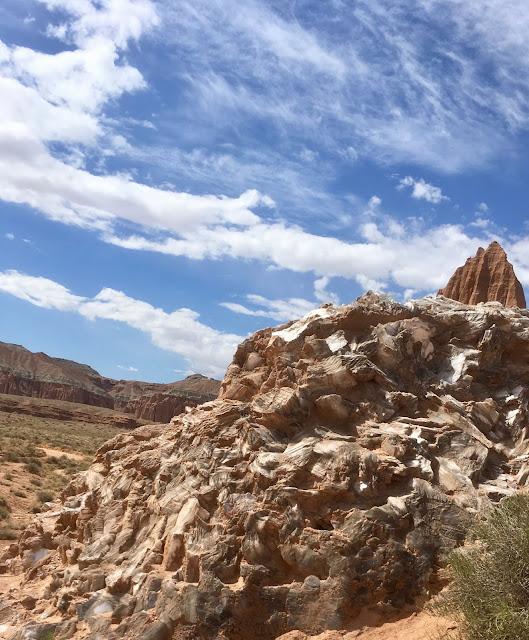 There is also a very strange formation called Glass Mountain. It is too small to be a mountain, but the strangest rock I've ever seen. It looks like our usual sedimentary rock was melted into glass, then broken up and squished together. It also looks like people have taken large chunks of it away, probably to rock shops, hopefully mostly before Capitol Reef became a national park.

On Wednesday evening we drove to an overlook area that is supposed to be fantastic during sunset.

Throughout our trip, clouds were better suited to comfortable hiking than amazing photography, but the views were amazing. 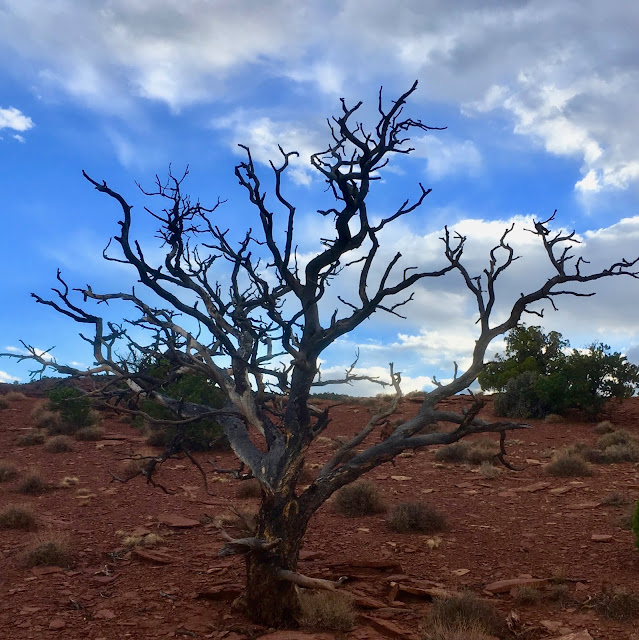 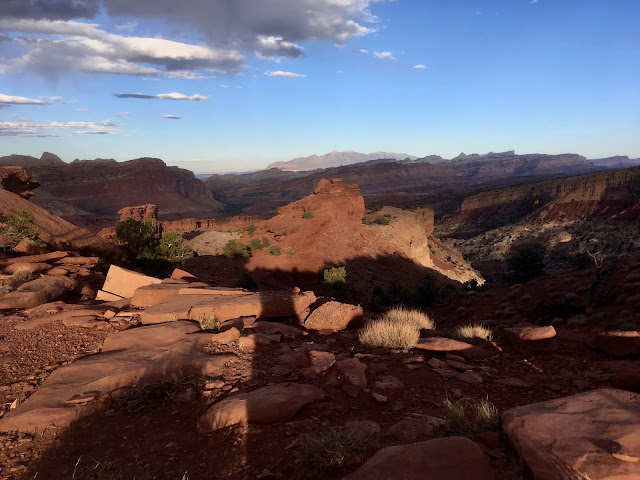 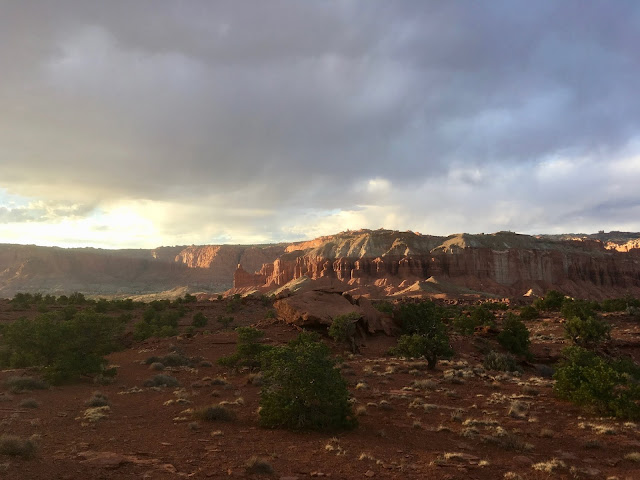 I also got a rare shot of my parents resting 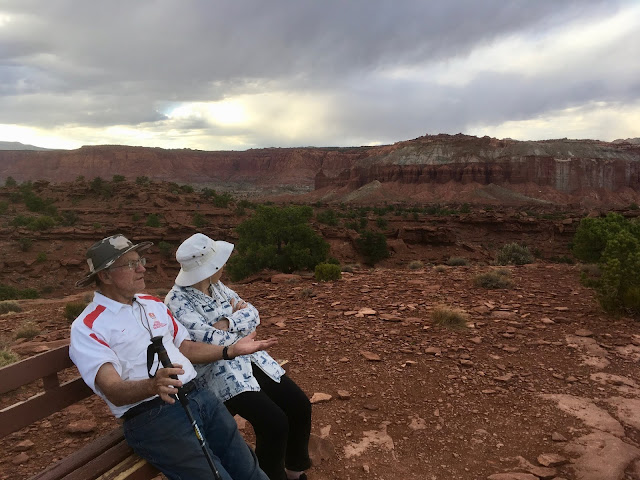 And an iconic shot of my son standing at the highest, most distant point in hope of enhancing the only cell phone signal we picked up in the park. (I was equally needy, but not as physically able.) 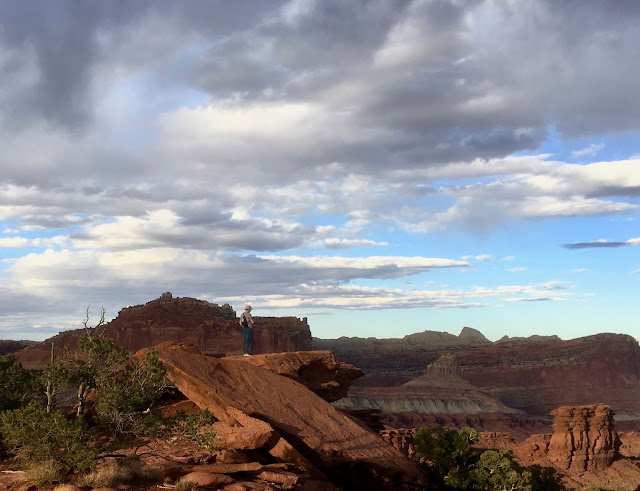 On Thursday I was done. While everyone else went on another hike, I rested, knit, and read. I took a very short morning walk to the pioneer store to buy pie and other goodies. How many campgrounds offer fresh pies and sweet rolls (at tourist prices) every morning?

Though I am still feeling my big spring adventure, it was worth every bit of weakness and discomfort. I'm eager to go back soon.

Also my yard is still very pretty and my wild rose is blooming. 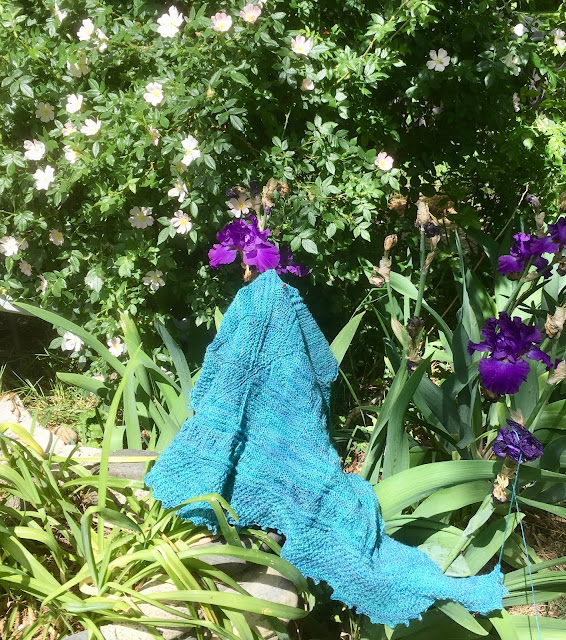 THE KNITTING went well on my travels. The sky blue shawl I finished will be mine, but the darker blue I'm working on currently will either be a family gift or end up in my shop. 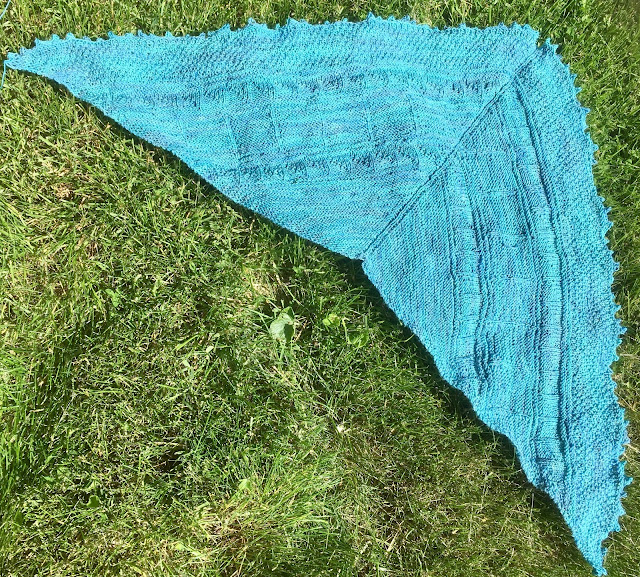 THE PODCAST was pre-recorded, but didn't post until I got home on Friday. It is a flirty poem comparing love to an annoying dog. What shall I do--it whimpers so . My old dog fell on his face running out to welcome me home, so it would have been mean of me to use his image as illustration if he hadn't stolen half of the hamburger buns off the counter yesterday evening. 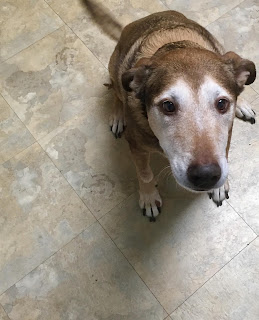