A Ditch Runs Through It 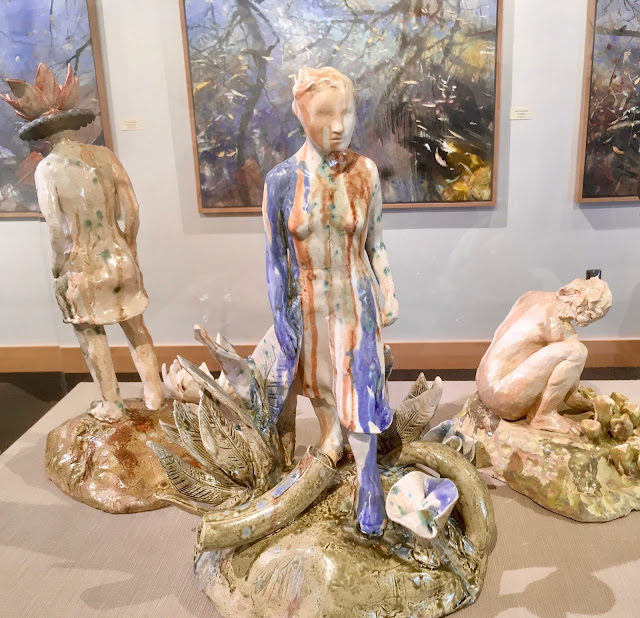 My blog is late this week because I have been swinging between excitement and exhaustion. The excitement has been great--an art exhibit, HAMILTON (!!!!!), dinner with friends, the symphony tonight. But as I pointed out in last week's blog, there is a cost, so when I wasn't partying, I was in bed.

This week's focus is on an art exhibit by my friend and neighbor Heidi Moller Somsen. I've been a fangirl of her sculpture for a couple decades now, so every time she has an exhibit I'm there trying to figure out how I could possibly accommodate one of her pieces in my small, cat-infested house.

I haven't answered that question yet, so I continue to dream and to enjoy her art in galleries.

The current exhibit is at the main Salt Lake City Library on the 4th floor until June 15. Locals should really get out there because I photograph art badly and it needs to be seen in person.


Ditchbank
Sculpture by Heidi Moller Somsen and Paintings by Downy Doxey-Marshall
Sat, Apr 21, 2018 to Fri, Jun 15, 2018 - All Day
EXHIBIT STATEMENT
There is a desperate beauty in the shaggy unkempt wild places, existing just beyond our manicured yards. The ditchbank contains equal portions of death and life. It nurtures itself by way of its decay. It is a gyre of activity, held in suspense, waiting for water (or waiting to drain). Back in the studio, the effort begins - translating the ditchbank into form, color, texture; the expressions of our meanderings. 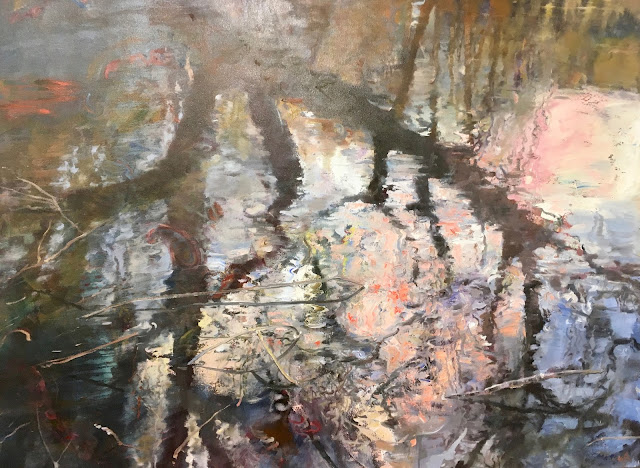 I grew up on a ditch bank.

Years ago, my neighborhood was laced with irrigation canals and ditches. Most families had large gardens and orchards or pasture for livestock or both. Irrigation was done by hand. My dad and grandparents pumped water up to another series of ditches around the garden whenever it was our turn. Irrigation turns could come on any day and at any time of day or night.

Sometime while I was in high school or college, ditches were replaced by pipes. Irrigation waters our large garden and larger lawns with almost the same convenience as city water. There is rationing at the end of summer, but otherwise it is yard watering on-demand and easy.

The ditches are gone. That makes a safer world for small children, but led to a loss of many of our ditch bank plants--potawatomi plums, wild roses, asparagus, river birch, and milkweed.

My parents didn't want me to be on the ditch bank, for safety reasons. Our ditch was never more than a couple inches deep--no threat to an elementary age kid, but it was as far from the house as you could get, right next to the road, and out of view.

The hidden and forbidden nature of my hang-out added to its attraction.

I had plenty of dolls lying neglected in the house, but when outdoors I made my own. Inch-long pieces of straw were dressed in leaves or wilted flower petals. Their lives were very dramatic and affected by the part of the yard in which I played. 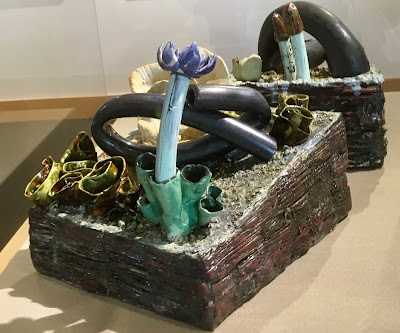 For example, a character could start in the arid dessert of the sand box. After tragically losing her family to a dust storm, she somehow finds her way to either a royal court or fashion center near a flower garden.

She makes her fortune as a model or dressmaker, but has to flee a forced marriage or regime change or some other evil and flees to the wild lands of the river.

The ditch was the equivalent of the Wild West where fortunes were made by ranching livestock represented by plum pits. 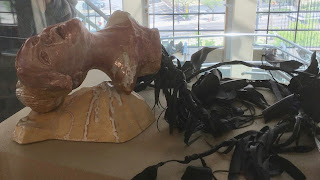 Disaster and tragedy often occurred due to the fluctuation of water depth. Houses and corrals were built from rocks in the water, so a rise could wash away whole families and start the story again with all new characters.

I played these games in the mud and in my head through elementary and middle school, but by middle school I started to feel like I should have outgrown them. 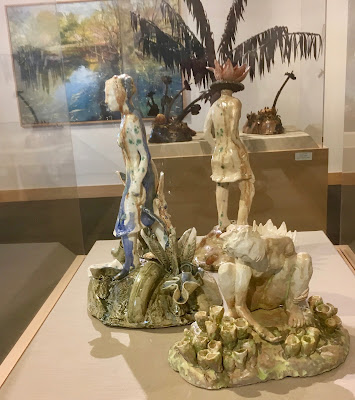 I remember deciding in the summer before ninth grade that I was too old and wouldn't play my game any more. Sometimes when I passed a flower garden with the perfect wilted petals for a dress, I would briefly give way to temptation, but I was too strict with myself to carry a story through to the end.

What did I learn from years of self-scripted soap operas? I'm not sure. My characters did have to be resilient and start again multiple times. Maybe they were models of creativity and courage, maybe they were just shady moments of escape from younger siblings.

Like Heidi's sculptures, perhaps I experienced strange changes and growth from this wild environment that I would have missed by behaving myself and staying in view of the kitchen window. 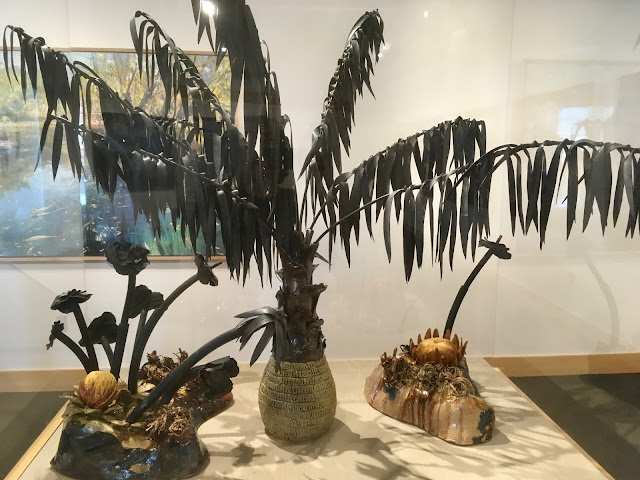 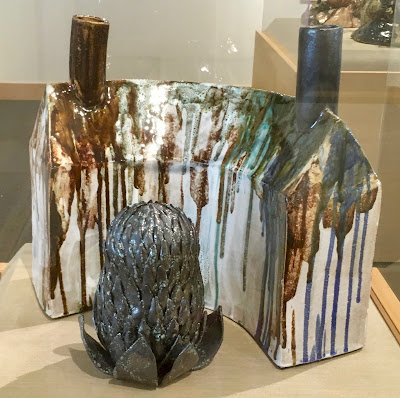 I personified pieces of straw. Emily Dickinson personified her flowers. There are two pretty flower poems in THIS WEEK'S PODCAST.

THE KNITTING proceeds very slowly in this week of fluctuating energy. I'm really not feeling up to both photographing knits and visiting the grocery store. We're out of both Coke and Dr. Pepper, so I'd better choose groceries.

I'll leave you with a few more pieces of art. 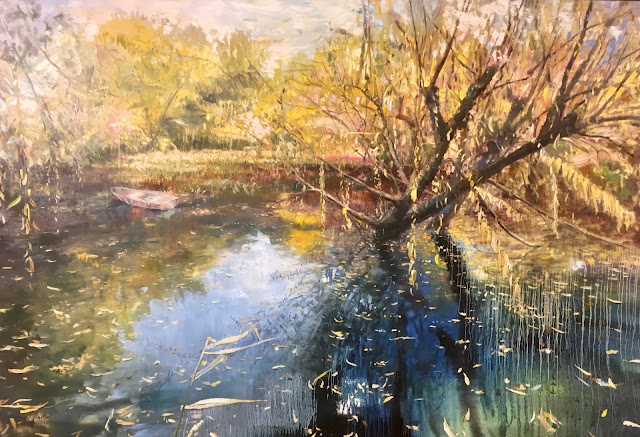 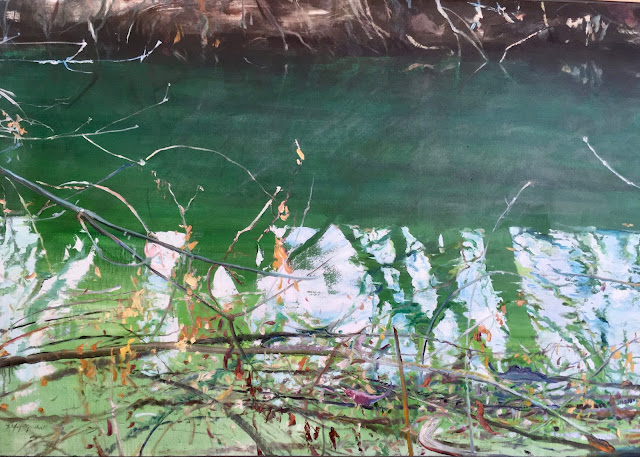 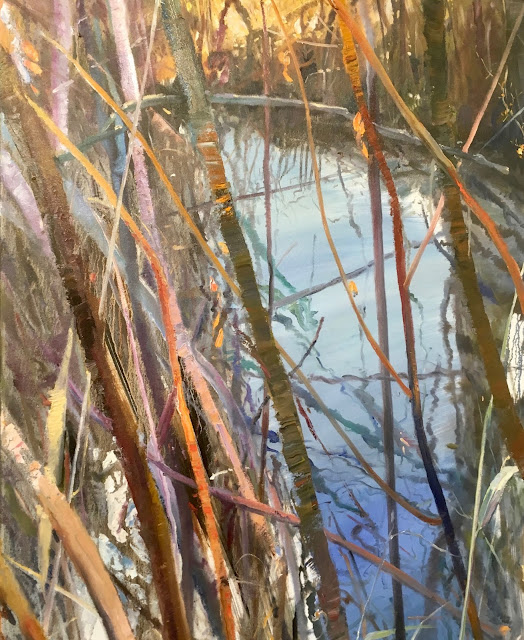