You never forget how to fall off a bicycle 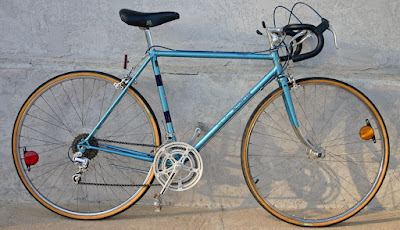 It was my ten speed, also powder blue, though this time a sleeker-looking boy's bike, that brought me a degree of freedom as well as speed. I'm not sure which birthday brought this grown-up bike, but I was old enough to go on my own  (with permission) to visit friends and attend church activities.

It also brought new challenges. I had to learn how to use hand breaks to control myself on our steep hills. I had to figure out how to shift down to climb those hills. I also had to figure out how to get on the bike and get started. I couldn't reach the ground from the seat. My preference was to start next to a curb so I could have one foot on the ground as I pushed down on the opposite pedal to start.

I only remember one fall on the ten speed. Too  close to the edge of the road,  one wheel dropped off the four inch difference between pavement and shoulder and I went down. There was no real damage to me or my bike, but I remember this as scary and painful. Apparently even thirteen-year-olds fall less easily than seven-year-olds.

By high school, my activities were even further from home and my mom was relieved when she could let me drive to all the lessons, school activities, and 4-H meetings. My bike was effectively retired.

More than thirty years later, my sweetheart started thinking about getting bikes so we could explore the Jordan River parkway further than we can on foot. I was nervous, but don't want to discourage any adventures. Besides, our April birthdays were months away. 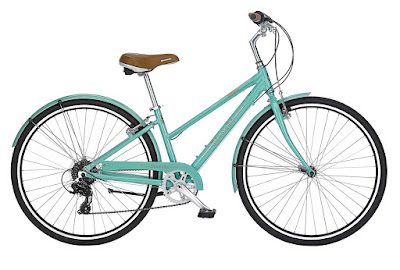 But in March, it really happened. We went into the Cottonwood Cycle to look around, but quickly became customers. Choosing my bike was love at first sight. Officially "green" (yes, I've heard the whole story) my blue bike matches my hair and caught my attention immediately. I patted its seat and handlebars and admired its beauty as my husband did all the bike shop business.

My birthday was Thursday (That's my excuse for a late blog too.) Despite frequent rains, we have been out on the bikes three times. This is the first time in my life I've worn a helmet and probably the least likely for me to need it. We plan to ride on nicely paved bike trails away from traffic.

I'm 49 this year and hope not to fall at all on this bike. That was my thinking when I decided on a "girl" bike again. I can quickly put my feet on the ground if I have to. The other advantage I have discovered is in mounting the bike in the first place. I can almost lift my leg enough to get on this bike, but I still need to turn it sideways to lower things a bit.

Despite being an old lady, once I get started, I am seven again. I feel the same thrill over the slightly out-of-control sense of speed, the same roller-coaster-fear on a tight turn, the same sense of freedom. 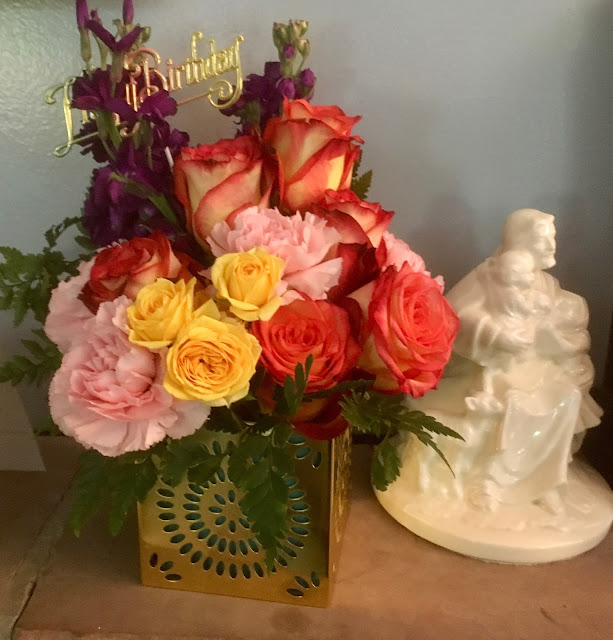 I'll catch up on the knitting news next week, but should share the podcast.

My husband is amazing, so in addition to a bicycle and dinner, he got me a beautiful gift of flowers.
Coincidentally this week's podcast is about poems Emily Dickinson sent with gifts of flowers.

You could make my day by subscribing to my (usually very short) podcast by looking for Poem Moment on either Podbean or iTunes.