My Week as a Sidekick

Husband was eager to get out of the house and away from his computer. I'm always up for a drive. So we hopped into his sexy red car and started out, choosing our destination as we went. Eventually we settled on Flaming Gorge, a reservoir and hydroelectric dam in Eastern Utah.

It's no fun to go the same way twice, so we circled around the back side and arrived via scenic byway.

We saw antelope, deer, bison, and a herd of either wild or very unsupervised horses. Fall colors were fantastic and pretty small towns tempted us to move away from the traffic and strip malls at home.

We ended up driving all day, coming over a mountain and down a winding road towards home as the last light faded from the sky. It was a glorious day, definitely a wonderful prelude to an otherwise tiring (though productive) week.

I feel like I spent the rest of the week at a car dealership. The insurance money came in from our deer-totaled car and Oldest was ready to leap into adulthood and buy a car of his own. He did the research, picked a likely car, and set up an appointment to see it at our nearest Carmax.

Oldest didn't need my help, except it was apparently my responsibility to add the new car to our insurance.

So I went along, listened and nodded, but let my son do the talking and deciding. The presentation there was low-pressure and informative, my kid is really a grown-up, so it was as good as buying cars gets.

Which means it only took two or three hours. That's a long time to sit to make one phone call.

But oldest has a car now and doesn't need mine. Mission accomplished.

But two days later, I was back at the dealership. Husband's sexy red car is impractical in snow and aging into increasingly expensive repairs.  So he has been talking for several years about replacing the dream car with something more practical. It turns out that our road trip was a way of saying goodbye to the Mustang.

Oldest's positive experience led my husband to the Carmax website and to two possible replacement vehicles.

And led me to another couple hours at the dealership. More input was expected from me this time. Technically this is "our" vehicle, but my husband is the one who will be driving it every day. This is replacing a car from wall posters and action movies. My husband was the one who had to choose.

We are now the proud owners of a luxurious silver SUV.

And I got to call the insurance company. 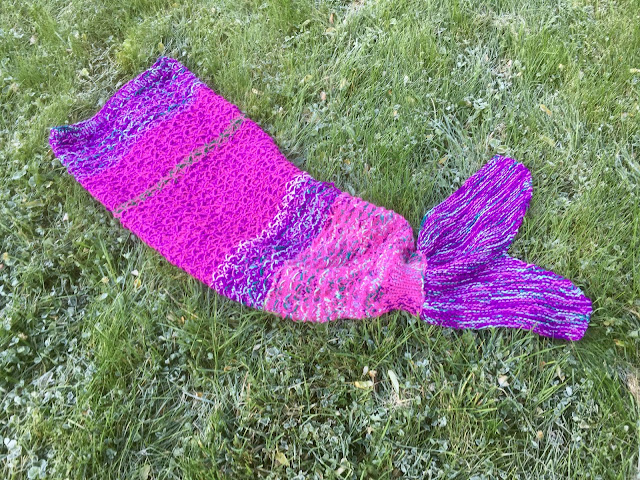 I've completed the second of five or six planned mermaid tail blankets. This is as many as I have to have ready by Christmas and I've got a good start on next Christmas. 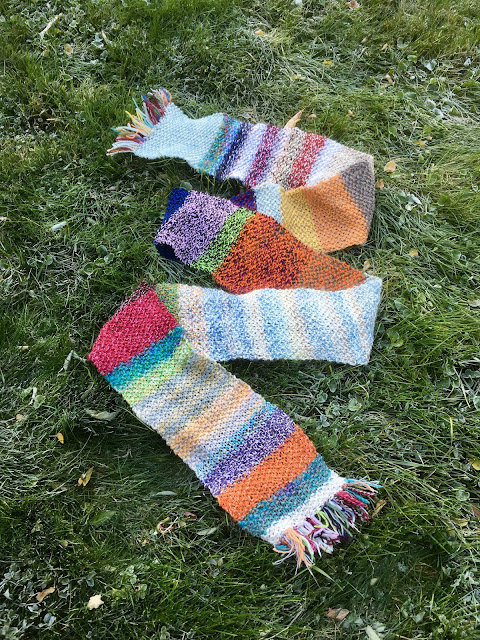 This is a very long, mostly wool scarf I will call Odd Ends. I would wear it if I wore coats. In the meantime, I will put it up for sale.

Next week a friend is hosting a trunk sale, which I hope will greatly reduce the inventory in my shop. After that I'll spruce things up and add more new items.

This week I will be desperately tucking in loose ends and getting things accurately tagged and organized.

The last item I am listing is my only attempt so far at the "messy bun hat" which has at least been popular on Twitter knitting feeds.

Basically I had a limited amount of lovely yarn and ran out. I think it works. 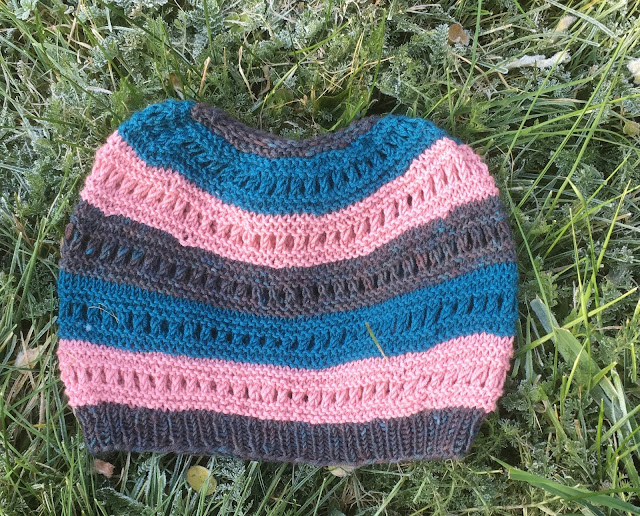