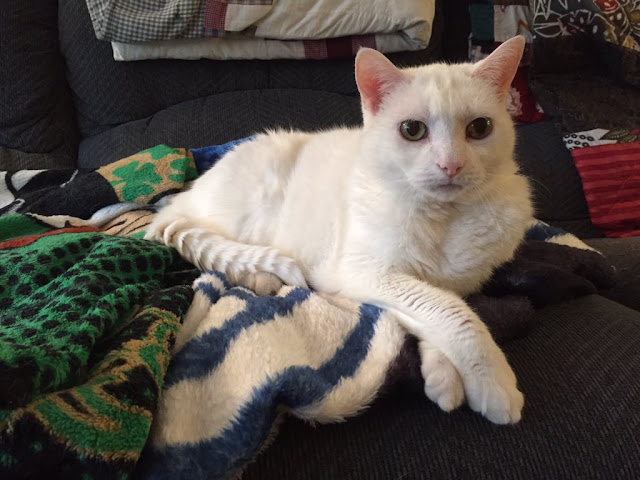 The internet is weird. Saturday morning I found myself genuinely saddened by the passing of Bitches the Cat. She was a Twitter celebrity who mostly showed off "paw work" (demonstrated above) and meowed the praises of catnip. She has two younger siblings who were a source of many postings and complaints.

She also got political and was delighted at being blocked by several members of the Trump family. A favorite hobby was enticing people into hours-long arguments about whether or not cats could actually use the internet.
I will probably miss Bitches as much as I will miss either of the shedding throw pillows with which I spend my life.

Far from offering to lead the resistance, my cats are shockingly disengaged from politics. If they had to express opinions, it would probably be in favor of monarchy.

They are also even more useless than I am. I feel like I spend 20 hours a day resting or sleeping. My cats manage 23+. We have sloths beat at sloth and are trying to compete with Gila monsters (which spend 99% of their time in underground dens and come out very rarely to mate and eat).

I'm not sure what drives the human need to connect with people (or cats) we will never actually meet, but celebrity culture seems pretty inescapable. Despite the fact that next week I will celebrate my country's almost 250 year freedom from the British monarchy, I know who Pippa Middleton is, that she has a famously beautiful posterior, and that she has recently married. To my shame, I know more about the Windsors, whom I don't actively follow, than I do many of my own cousins.

Before we had the internet, there was television, radio, magazines, newspapers. Go back far enough and celebrity news was shared through dime novels and sheet music. Before that there were traveling actors and musicians.

It may be that following the adventures of celebrities and heroes adds excitement and glamor to our lives without the risk and responsibility that comes with real relationships.

Who are your favorite famous people (or guilty obsessions)? What do you love about them?

A friend has commissioned me to knit some pretty throws for her living room. Those will be my primary knitting for at least all of July.  This is the best type of knitting. Someone else pays for fancy yarn and provides a use for the final product. I'll keep you updated on my progress.


I finally have the pictograph shawl and the green silk and cashmere wrap finished. They are currently being blocked, which means they are washed and then pinned into the desired shape to dry. Once they are dry enough to photograph properly, they will be posted in my shop.