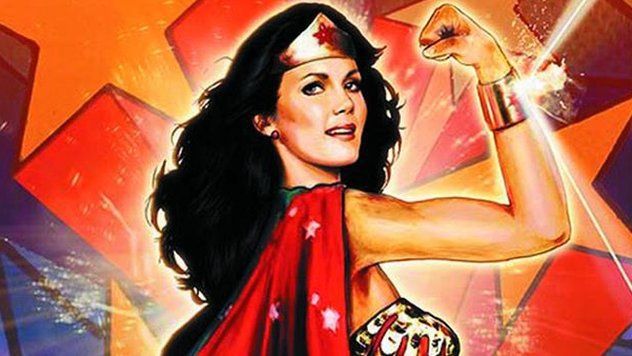 As I mentioned in a previous blog, Wonder Woman is one of my early role models. I never got into comic books, but I watched her adventures on Saturday mornings in Justice League cartoons. Even better was the prime-time show starring Linda Carter.

Wonder Woman was fun to play. Any jumprope would work as a lasso of truth. Transforming into a hero was as easy as spinning. All bracelets were (and still are) bulletproof.

Excitement over the new movie inspired nostalgia, so I watched the first few episodes. It's both as fun and as hokey as I remember. She punches a lot of Nazis (in Washington D.C.) and repeatedly saves the clueless but handsome Major Trevor. Other than very bad special effects (I love the invisible jet), it doesn't age too badly.

I'm sure women had the same mixed feelings about Wonder Woman in the 70s as now. The Wonder Woman theme song encapsulates the good and bad. 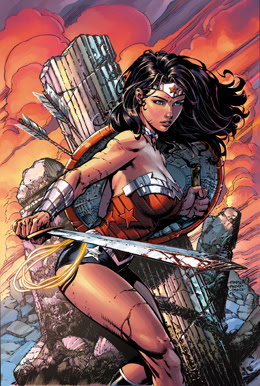 The "satin tights" are definitely an issue. Wonder Woman's pinup girl/dominatrix look makes it hard to take her seriously (unlike Superman, who wears his underwear on the outside of his clothes).

That is probably why the menfolk in my house laughed out loud at the line, "Get us out from under, Wonder Woman."That comma just wasn't sung clearly enough.

But the other values expressed in the song still strike a chord with me:

Make a hawk a dove. Stop a war with love. Make a liar tell the truth. Stop a bullet cold. Make the Axis fold. Change their minds, and change the word.

The DC Comics movies have gotten quite dark, so I was worried that the new Wonder Woman movie might leave behind the values that I love.

There were definitely changes. Special effects made fight scenes and exceptional powers much more realistic. The beginning part with the Amazons showed serious warriors instead of sexy girls in flowing fabrics.

Because the movie is set in WWI instead of WWII, there are no jets, invisible or otherwise, and no Nazis. Major Trevor is a much more believable spy because he is morally ambiguous and flawed.

But Diana is the same. She wants to help everyone, save everyone. Gal Godot does a good job of showing both the innocence of a girl raised in a sheltered world and the power of a skilled warrior.

Because Diana is dropped into the unsolvable world of war, she sees the worst of humanity--murder, deceit, destruction of the innocent.

Over about a week in time, Wonder Woman reaches the depths of disgust and despair, then has to decide if the human race is worth saving. She chooses to keep fighting for us because of our capacity to love.

I wonder how long it will take for the rest of humanity to reach the same conclusion.

In the upcoming Justice League movie, they are updating one of the least respected superheroes. Aquaman has always been geeky. Plus they really have to twist the plot to find a use for talking to fish. But in the new movie, Aquaman will be played by Jason Mamoa. It will definitely make me want to spend more time by the ocean.