A Gimp's Guide to Southeastern Utah

Most of the land between the Rockies and the Sierras looks dull and desolate. If you remove the artwork from the photo above and maybe turn down the red in the cliffs, it could be almost anywhere. There are huge gaps between wonders. So the truck, and my dad as driver, did a great deal of work. We drove bout 400 miles after parking the trailer in Green River.

The Green River State Park is an oasis of cottonwood trees (and mosquitoes) on the banks of the Green River. From the picnic table I could see a railroad bridge across the river. We compared how well each of us slept by comparing the number of train whistles heard in the night. 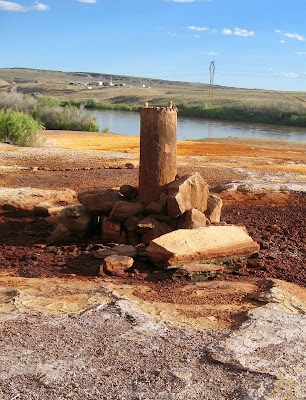 On the first evening, we drove to two nearby sights. Crystal Geyser is caused by chemical rather than geothermal forces. It was created by people who were drilling for oil, but hit carbonated water instead. No one I know has seen it erupt, but guide books claim it happens every fourteen hours and shows a picture as proof. Chemicals in the water stain the rocks in interesting colors that match the silk/wool scarf I knitted.

On the way out and back, we spotted two families of pronghorn antelope--a total of 12. We also saw two cottontail rabbits.

After that we drove out to Gray Canyon. There is a nice campground on the river at Swasey's Beach.

We enjoyed the chance to drive past some of the farms that produce famous Green River melons. Main Streets in rural towns don't show much of their stories. 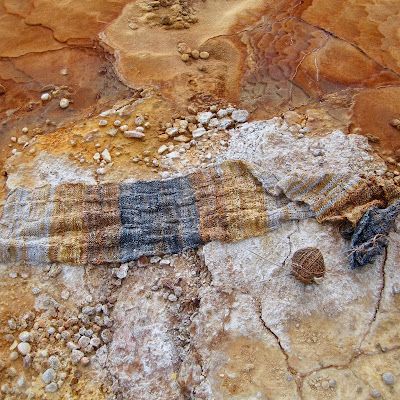 Our only eating out was that first night, at the Tamarisk Restaurant. It is locally owned and top quality, though I must warn that the salads are enormous.

Tuesday was my favorite day. We first drove to Black Dragon Canyon. Dark desert varnish on the sandstone walls could easily inspire it's name. So could the shadowy twists of the canyon, but it was really inspired by pictographs we found after a gentle walk.


It is easy to see the painted human shapes on the left side of the picture. If you look carefully for the same shade of red on the bottom left and use your imagination, you may see the shape of a dragon.