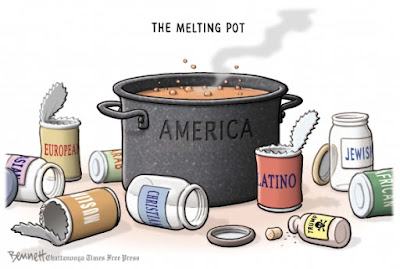 One of the best things about the American melting pot is actually from the pot--food from all around the world. In any given week, my family will eat food that hails from Mexico, Italy, Greece, and China. Add in Japan for my solo sushi meals.

And because this is America, it all gets delightfully mixed up. A nice Peruvian family does most of the work at our favorite Greek hamburger joint. We have a good Chinese restaurant where everyone is related and speaks Chinese, but we also indulge in drive-through Panda Express where the chefs are usually Mexican.

What we almost never eat is German food, even though my dad was born in Germany and I grew up next door to German grandparents. Part of the problem is that there are few German restaurants in our area and no drive-throughs. (Working full time and chronic pain have curtailed my cooking and made us very reliant on take-out.) But the other issue is a lack of family recipes.

My Grandma was sometimes embarrassed by her inexperience when it came to German cuisine.  A German couple moved into our neighborhood and congregation when I was a child, but Grandma could never relate to them. They were a generation younger and a whole lot richer. When they talked about food, it was mostly about things Grandma had never tried.

Food wasn't easy to come by in Grandma's Germany. She was born at the end of WWI, grew up during the Great Depression, (which was far worse in Germany than in America) and got married two years before WWII. Here is a childhood food memory from her personal history:

Late afternoon just before the market closed the farmers would look through the bushels and baskets, and if it did not look good enough to bring back the next day they would dump it into big garbage trucks. That's where the poor people would watch and sort out the pretty good fruits and vegetables (mostly apples, pears, and oranges). My father always came home with a sack over his shoulder . . ..
Then at home the oval bathtub was on the kitchen table filled with clean water and all the gathered fruit got dumped in and washed good. Then they were nicely peeled and had the bad parts cut out, We children would all stand around the table and eat all we could. It was a favorite supper: bread with sliced pears or apples on it.


(One Christmas Eve, my cousin-in-law Nettie Frank, brought tasty appetizers with bacon and pears on bread. I thought it was a tribute to Grandma, but it was actually a chef thing.)

Diet staples were bread, potatoes, cabbage with a little meat--usually sausage, when it could be found. Right after the war, things were at their most desperate, as Grandma reported:

When you went to bed and laid your head on a pillow it turned like a carousel and you hold on to the sides of your bed. Walter and especially the children had open sores on their legs and head that would not heal. . .. Many times we would divide the last end of bread for the children and we would find something in the garden to eat--berries, vegetables, etc. It got worse and worse. Every month the ration got cut.

Near starvation made Grandma appreciate simple foods. The LDS welfare services shipped food into Europe as soon as possible after the war. One of the most joyous sections of Grandma's history talks about those food basics.

First we received potatoes from the saints in Holland!! After the German soldiers and tramped all their beautiful land down when they marched in. What a blessing that was. The stores also had vegetables from Holland, especially cauliflower which we ate three times a day. This was too much for some of our kids. They still don't like it even today. Then from America came five pound bags of cracked wheat, canned peaches, canned milk, and pork and beans (which had only one layer of beans on the bottom and top and the rest was pork--was that delicious!) To this day I like cracked wheat cooked in water and as a special treat a little canned milk added to it, then pour peaches over it--the perfect meal. . ..

Grandma was thirty and had four children when she immigrated to America. Food was more plentiful, but there was neither time nor money for gourmet ambitions. Grandma was always busy gardening, taking care of children, and working part time for extra money. She cooked constantly to feed the masses, but usually while doing other things. Her youngest sons teased her about being a "pot smoker" because she often put something on to cook, then went out to the garden and forgot about it.

Gardening and preserving food from that garden was a full time job and an essential one. Famine was not abstract to my grandparents. They worked hard to stock up against hard times. Food was the ultimate blessing and never to be wasted. Here is a poem I wrote about Grandma and food a few years after she passed away and I moved into her house.

You’re here when I pick peaches off the ground. 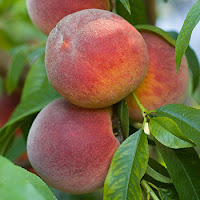 We cannot let them rot; waste is a sin.
No matter there are plenty on the tree,
Far more than I can eat and I won’t can.
You did, filling up a fruit jar fortress
Against the famine that you feared would come.
Your childhood hunger forbade picky eating.
Refusing vegetables would bring a frown
And sermon on ingratitude to God.

Mowing your lawn, I wonder what you thought of
While doing the same task. We scarcely talked—
Both shy, quiet, me intimidated,
Afraid you might send me to clean my room.
Watching taught me what we have in common:
Deep set eyes, big hips, and busy hands.
(I’m always knitting. You preferred crochet.)
You rarely smiled—we’re not a smiling clan—
You, me, Dad, though transplanted to sunshine
Stay gloomy like the gray of Hamburg skies.
Being outdoors seems to ease the burden
So I plant gardens underneath your trees.

What separated us is you could work
And seemed to like it, working all the time.
I will stand in weeds grown past my ankles
Ignore them and just gaze up at the sky.
You spoke in black and white and right and wrong
While I prefer the muddy shades of gray.
You taught high standards and though I fall short
I eat my vegetables because of you.

For many years, there was a family newsletter which each sibling contributed to. When Mom read them out loud to us, we laughed because they were almost all farm reports. Planting, weather, harvesting, took priority over dance recitals and soccer games. 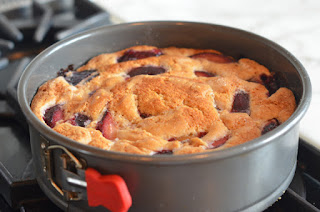 Fruit dishes are the part of my childhood garden diet that I remember most fondly. Probably because I didn't appreciate vegetables until adulthood. Grandma had two wonderful improvements to a basic white or yellow cake. Her go-to recipe was to top the cake with canned peaches with the juice thickened into a similar texture to Danish dessert. Of course there was Cool Whip as well. Even better is plum cake. The plums are Stanley or Italian plums--prunes before they are dried. The plums are halved and arranged inside-up on the top of cake batter, then the whole thing is sprinkled with sugar and baked. It's heaven, believe me.

I don't know if it's a German thing, but my mom would sometimes make fruit-centered dinners. Potato pancakes topped with applesauce (only good with tart, home-made applesauce) is German. But we also had cherry dumplings, tapioca pudding made from homemade grape juice and topped with vanilla ice cream, and homemade vanilla pudding topped with peaches, strawberries, or raspberries. Those may not have all been main courses, but that's how I remember them and it's making me hungry. I need to defrost a quart of raspberries and call it lunch.

Do you have an ethnic food tradition, or a longing for one? I'd love to hear about it in the comments. 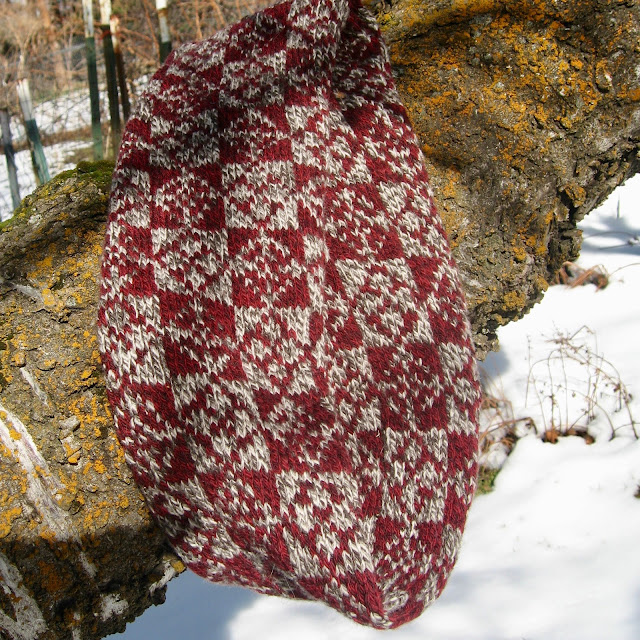 I am quite happy with my finished cowl made from beautiful merino from Mountain Meadows Wool. It is a nearly seamless tube and is very warm. I think it would be great for people who walk year round or cross country ski. It is available in my shop. 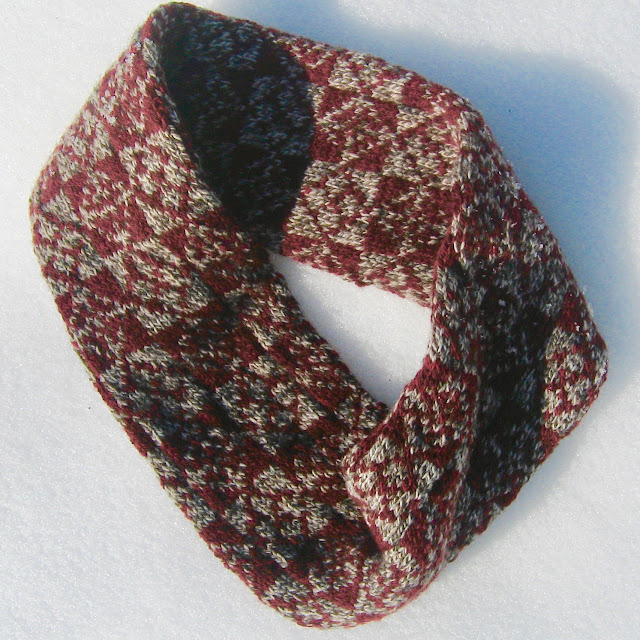 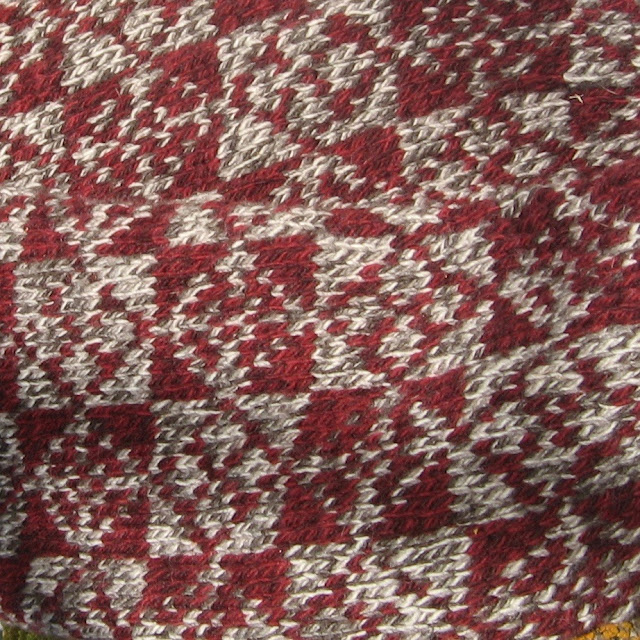