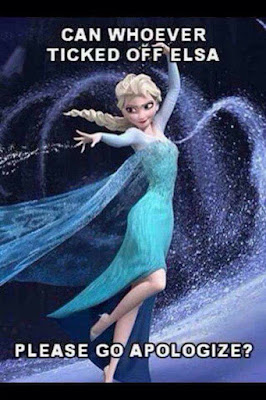 THE MUSING
Tuesday morning the phone rang at 6 a.m. Not a welcome sound, but it would have been a year ago.

While teaching I would be awake at 5:30, listening to local news, and looking out the window. And the call  I received, a robocall from the school district, would have been what I was waiting for--almost.

In most places, Tuesday would have been a snow day. But this is Utah; we are descendants of hardy pioneers. We don't have snow days.

Snowy places do have fewer snow days. My sister moved to Virginia from Michigan, then lived in Sweden before moving back to Virginia. She explains the differences well.

"In Michigan . . . you only got out for a really bad ice storm. Snow and cold was life. You sent your kids to school in full snow gear--boots, snow pants, hats, gloves, etc and they'd build snow forts at recess.

Sweden went even a step farther. When winter was coming we asked friends how we'd know if school was cancelled for weather and got blank stares. It was so completely unheard of there that there wasn't even a method. No one, adult or kid, had ever seen it done. In general in Sweden weather was something you just worked with. They didn't cancel outdoor parties for rain or beach trips to cold either, so you certainly aren't going to cancel school over it.

In Virginia, I am not exagerrating when I say they cancel every time there is an official winter storm warning and most times there is a watch--which has resulted in several "rain" days when the snow never happened. We cancel for any snow accumulation. We cancel if there is any ice anywhere. After a snowstorm, we are often closed for a week or more waiting for every trace of snow to melt from roads and parking lots before it's deemed safe to return. We wind up with 10-15 snow days every single year. . . . And then there's all the early releases when they are scared it might start to snow and all the late starts when they think it is too cold. We also get early releases when it is too hot and have even had days off when there were weather service warnings for high winds or flooding. In other words, if weather isn't ideal, schools close. 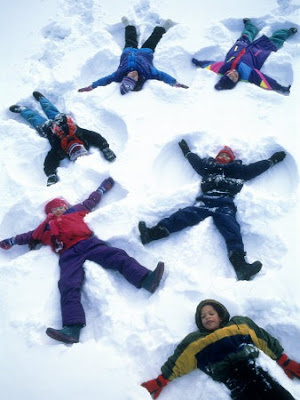 In Utah, Students and teachers dream about snow days. We've seen the Simpsons, our cousins, kids on the news, experience snow days and they seem wonderful. Snow days are portrayed as unplanned holidays with sledding and hot chocolate.
Here is a great song about snow days from a teacher's point of view: https://www.youtube.com/watch?v=YnIRfvFLiWQ


But the POWERS THAT BE have to consider the practical problems of snow days. 180 days of school time is legally required. No one is going to pay for extra, cancellable days. Days that are cancelled during the winter have to be made up. There is also the awareness that kids will be dropped off at the school at 6:30 in the morning no matter how many news outlets are contacted. Principals have to show up no matter what to make sure those kids are safe.

Once during my time as a student, we were sent home early because a big storm was coming. It didn't. Parents were upset about kids turned loose without supervision or warning. The district was embarrassed.

Once during my 24-year teaching career, school was cancelled due to snow. The make-up day was scheduled on Saturday. It was a very unpopular decision. Only 1/4 of the kids showed up--more than I expected. 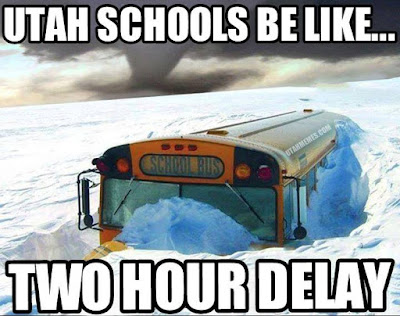 Now things are planned better. My Tuesday morning call was to inform me of a "late start" day. On exceptionally snowy days, school is postponed by two hours. This gives the snowplows time to get around and families a chance to dig themselves out. It works pretty well for the most part.

The down side is that, like I mentioned before, kids will show up at 6:30 whether school is open or not. Teachers who live close to the school are asked to arrive as early as safely possible on late-start days to help supervise students who arrived before 10:00. 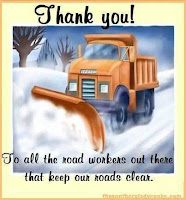 Provisions are made that if a whole day is cancelled, it will be made up either on Presidents Day or on one of the Spring Break days.

I always told my students that it is much better to have a planned day off in April than a sudden day off during nasty weather in January, but I don't think they were persuaded. I know I wasn't.


THE KNITTING
I have spent many hours spinning. One skein of yarn, autumn colors made from wool I bought at my local yarn shop and samples I got from a Phat Fibers box. It as worked into a handsome scarf that is not terribly long, but dense and nice and warm. It is available in my shop.

Otherwise I have unfinished spinning and further progress on large projects, but not really stuff to show.

It is very cold out there in most of the US. Ten minutes photographing a scarf and filling the bird feeder was enough outside time for me and my dog. You'll need a hat just to go out and get the mail. Featured are a set of brimmed snow hats I created a while ago. They will keep you warm in style.


HOW I AM DOING

Better--kind of. Physically, nothing has changed. But  my family has prayed for me and I have seen my doctor. I have started the process of ordering a new biologic. I have hope again.

One problem. It's been 10 days since my disability check was sent. No sign of it and bills are coming due. Income insecurity is a new one for us and it feels scary. A replacement check will be sent, and brilliant husband is juggling things, so we are okay, but it reminds me how scary it would be to rely on a single source of income, especially from a source that hasn't discovered direct deposit.
Posted by Unknown at 1:29 PM