Beautiful People, this Ugly Election, and Knitting I Don't Have the Heart For 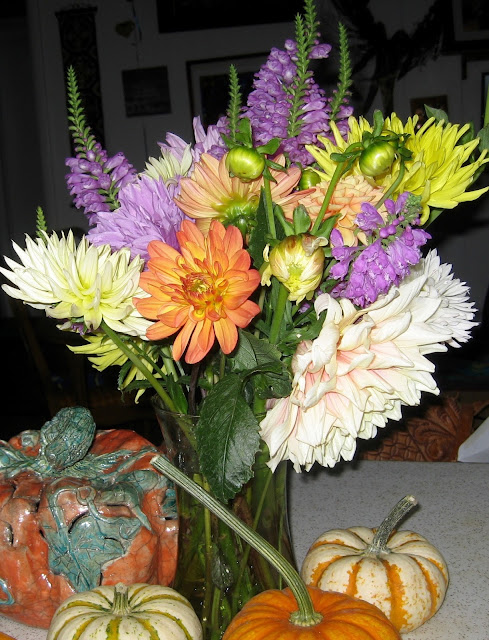 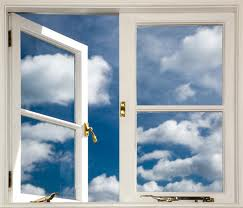 Being on disability, I don't get out much nor go very far, so social media is my window on the world. (And this blog is like a message in a bottle to lands beyond my living room.)

Politics in America are so divisive, and this election has been so negative, that the view is pretty depressing. To survive, I like to focus on the positive, on people I know and topics I care about.

I've only recently joined Twitter, but I've been choosy about who I follow. I'm getting to know more knitters, spinners, and designers.  I'm following blogs and tweets of disability and mental illness advocates.


My purpose for Facebook is to enjoy photos of your babies, grand babies, and fur babies. I enjoy your  vacations, your successes, your good deeds. 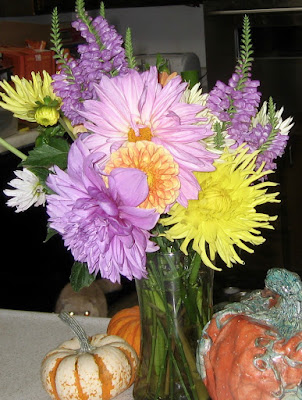 One of those good deeds saved my week. Only a few hours after the "Trump Tapes" were released. My friend Lisa brought me flowers. There was no occasion, it was just a Friday afternoon. Despite teaching special ed all week, she found time to cut fall blooms from her garden and bring them to me along with kind words about my blog.

Despite the apocalyptic predictions of both parties,  caring for each other, acts of love large and small,  saves our world every day.

Visiting my husband's dying aunt reminded me how love blooms during times of sadness. Aunt J was funny, loud, and outspoken--larger than life. Like most big personalities, she sometimes lacked tact, but never lacked good intentions.

For my first pregnancy, she sewed me some shirts and a dress. The dress was huge. I was sure it would always be too big. But during the last two months of both pregnancies, the white tent with blue flowers was the only respectable thing I owned that fit. 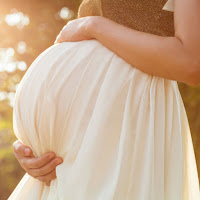 During the second pregnancy, I had plenty of cute baby boy clothes, but my oldest was wearing size six at age 3. I couldn't keep up.  J was one of the great relatives that followed the platinum rule and gave what I really needed--big boy clothes.

J is the mother of four boys who also show her type of practical kindness. My husband's cousins have spent countless patient hours helping to fix cars or work on remodeling projects at our house for nothing but a thank you and maybe some doughnuts.

They showed that kindness to their mother. Up to about two weeks ago, Aunt J was one of the liveliest people I know. But she suddenly started slurring and losing words. Tests showed cancer, in her brain and all over her body. Doctors said she might have six weeks, but she passed this morning. 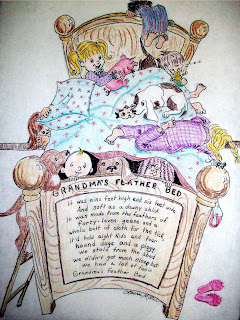 She asked to spend this time "with her babies." So her oldest son's living room became Grandma's bedroom. Four of her five grandchildren live there and wandered in and out with stories and cuddles. The dog stayed protectively close.  Her son and daughter-in-law took charge of her care while accommodating visiting friends and family and working full time.

I think most people would choose to spend their last few days surrounded by people who love them. I'm sure Aunt J felt that powerful love from her family.

Sadness and love also came together at a beautiful family wedding this week. Weddings between two good people are usually happy. As a family, we are certainly happy for the new marriage and our new sister-in-law.

But she is taking on a big job, marrying into a family of three little girls whose mother died less than two years ago.

She is joining two new extended families. The girls and their dad have been helped a lot by grandparents, aunts and uncles on both sides of their family. This support was visible on the wedding day. Sisters and parents of the first wife embraced the new wife's family.  It was beautiful,  and joyous, and heartbreaking.


KNITTING I DIDN'T DO
For a long time I've wanted to knit election-themed ski hats. The designs would be easy and fun. Elephants and donkeys are both cute. I also thought that a purple hat with both animals and/or question marks could be fun. But the political divisions have been getting more and more hateful, which takes the fun out of the planning. 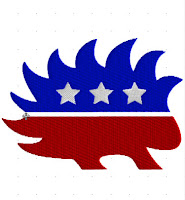 I had ruled out political knitting until I was browsing for political yard signs and discovered the porcupine that is sometimes used as a symbol for libertarianism. It is so darling that I started to plan again.


Not wanting to put time into numerous hats, I imagined a commemorative pillow with patches for each party. But in the end, I couldn't commit to that much time focused on this year's politics. My ballot is marked and in the mail.  I can ignore the circus until they start counting votes.

Bright colors make me happy. Right now simple patterns do too. So I'm working on the sleeves of my orange sweater and I've started a large square turquoise shawl.
Unfortunately, I broke another needle last night. A replacement is ordered from Amazon, but I'll probably pick up another from my local yarn shop this evening as well. 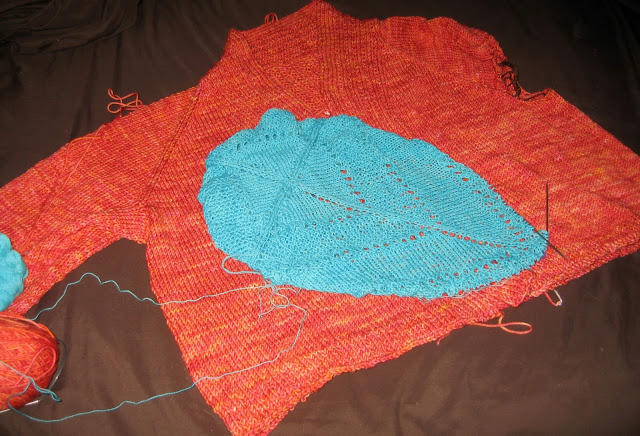 I'll post some finished projects next week. You can also find some in my shop. In the meantime, here are pictures of my cats. If you want unconditional love, get a dog. If you want unrequited love, a cat is a great choice.

I've felt fragile for a while. Storm clouds bring in extra pain and thoughts of winter ahead. But my favorite flowers are blooming.

I always forget I have them until they show up in mid-October. The tiny purple flowers have no leaves. Those came up in the spring. They are six petals on a weak stem. Rainstorms knock them down. They close when the sun isn't out. They seem fragile but they bloom for two weeks or more every fall and have spread in my garden for twenty years. 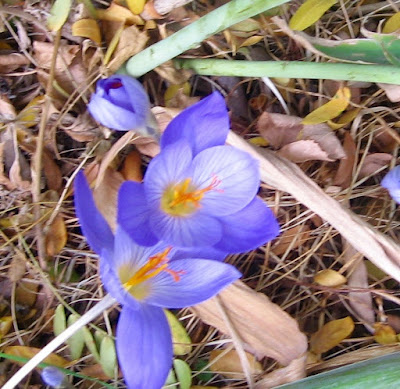