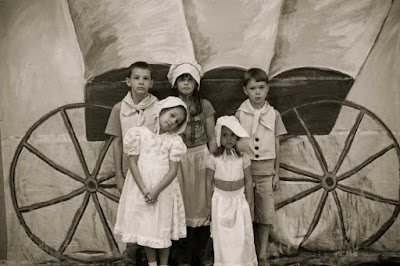 I've had a hard time composing a good Pioneer Day entry this week. I did realize that in my current state, if I wasn't considerate enough to just die, I would be left in Illinois to wait for the railroad. But I haven't always had to be wimpy. In fact, I survived a pretty rugged pioneer experience.

Our stake went on trek when I was 14 years old. At that time the trek was run by BYU recreation majors. The main object seemed to be authenticity. Moms in the ward sewed bloomers and aprons for the girls. In a patch of Sagebrush somewhere above Tooele, we were searched for contraband, including, maybe even especially toilet paper. Instructions were that if we had to go while walking it was "does to the right, bucks to the left." Our only modern luxuries were running shoes and sleeping bags. (We may have used bedrolls, but I don't remember.)

Our pioneer families were headed by a BYU "Ma and Pa" who were't necessarily married. Family assignments were made by the organizers with the goal of making us meet new people, so in my family of about fifteen, I knew three.

Walking wasn't bad the first few hours. We sang eighties pop songs and got acquainted. But they had us do all the walking in one day--20 miles, they said--walking from about 10:00 in the morning to about 10:00 at night. We had water and were given apples at some point, but that was it. Sometime close to when we should have had dinner, I threw up. I'm sure it was some combination of exertion and hunger.

I remember blurry stars in the sky as we walked through the dark. I wondered what they would do if I died on the trail. Would I be shipped home or buried on the side of the trail?

When we made it to camp, we were given a cup of beef broth and a hard roll, then we pretty much fell where we were to sleep.

We didn't walk very far the next day, just a couple miles to the main camp where we had the luxury of porta-potties.  We made a tent using our handcart and all of our ground cloths. We also got to make our own food. That involved catching, killing, plucking, and cooking a turkey. It really needed salt.

When my oldest son planned to go on trek, I was worried, but I didn't need to be. The families were made up of ward members with responsible couples called to be Ma and Pa. Other people were called to do dutch oven cooking for everyone. Kids were placed in compatible groups by their leaders. Parents were given a schedule so we knew what our kids would be doing every hour of the day. Three days of walking probably covered 6 miles.

Though I shared all my "up hill both ways through the snow"stories, I think the modern trek experience is better. We don't need to physically suffer like pioneers to appreciate their brave sacrifices, or to follow their examples of courage through our own challenges. 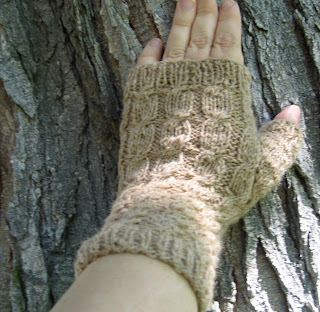 Pioneer women needed to knit. There was no Walmart for socks and mittens. I learned at a DUP meeting that during the first winter in Salt Lake Valley, people knit with dog hair because they didn't have enough wool. This new pair of fingerless mitts are knit out of all-natural, undyed wool. But they include a material the pioneers didn't have access to. It is fifty percent alpaca. I don't know when the first alpaca entered the valley, but I would be surprised if it was before 1900. 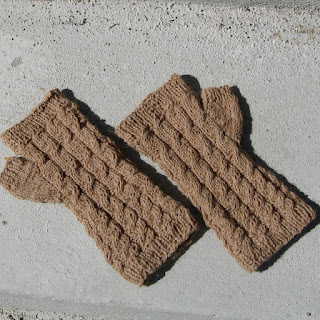 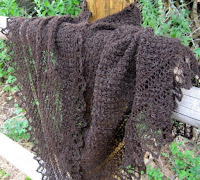 I'm also highlighting a shawl that a pioneer woman could have worn. It is a Victorian pattern knit from Black Welsh mountain sheep. Both are available in my shop 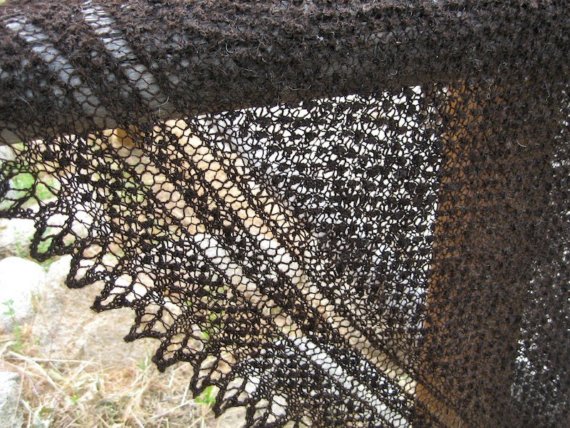