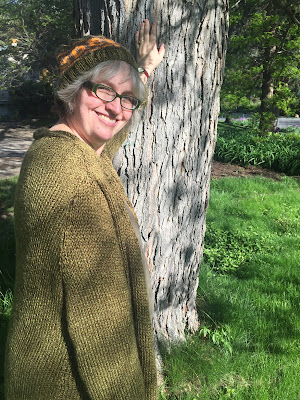 This has been a strange, sleepy week. Most days, I’ve slept in an extra half-hour, brought Lee to school, then slept until noon. By late afternoon I have to a lie down for at least an hour. I’ve only been swimming once because I’m trying to recover from whatever has knocked me over. Also, tomorrow I have an official knitting social event—a knit-a-long, at Unravelled Sheep. I paid  a month ago and don’t want to miss it, so I’m trying to save enough energy to be presentably human for five hours tomorrow. There is a lunch break in the middle, that might just be a nap.

Since I stopped working, I’ve wondered how I ever had the time or the energy to teach. But energy is a challenge for all teachers. Pain I’ve worked with for over a decade. What ended my teaching career was what my doctors call “cognitive difficulties.”

I knew all my students’ names before November, but could never call them up when I needed to talk to or about particular students—even the notorious student whose name I knew from trouble the year before. When I passed out papers to a class, I would lose the stack of papers before I got all the way around the room. Having a designated place to keep things didn’t matter. I lost the ability to teach and deal with behavior at the same time and was easily drawn off track by disruptions. My ineptness lessened my students’ confidence in me and my confidence in myself.

A new evaluation system didn’t help. For most of my career, I was one of the people who could translate edu-babble into language that made sense and could be acted upon. That skill was gone. I couldn’t understand the forms I had to fill out or how to incorporate required new tricks into my teaching. Passing was impossible. Ultimately the choice was between taking disability and being fired.

It is unclear whether my fuzziness comes from fibromyalgia itself or from the drugs that treat it, but it seems to be a pretty universal feeling. A good article about "fibro fog" can be found here.

Home is generally easier. I can still operate a dishwasher and a washing machine. I don’t drive any worse than I always have. My computer is set to beep for three days straight reminding me to pay bills. Usually my screw-ups are funny or easily overlooked. 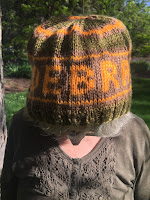 Last week was different. I was home and in charge while a contractor came to install some new doors. I was worried about the dog being scary or annoying. I was worried about the cats escaping, I wondered how I could continue to stay upright long enough for the doors to be finished. It never occurred to me that  doors could be installed wrong. I’m not sure what happened and why every interior door was installed backwards, but I’m quite sure I approved it in process and when it was finished. It was only when my husband got home and was upset that I realized they were wrong.

So it was on me to make three days worth of phone calls to schedule a reinstall (which we have already paid for) and it will be on me to greet the contractor and explain that he is making these  changes because I was stoned and/or stupid last time he was here. That will be next Friday. Can’t say I’m looking forward to it. 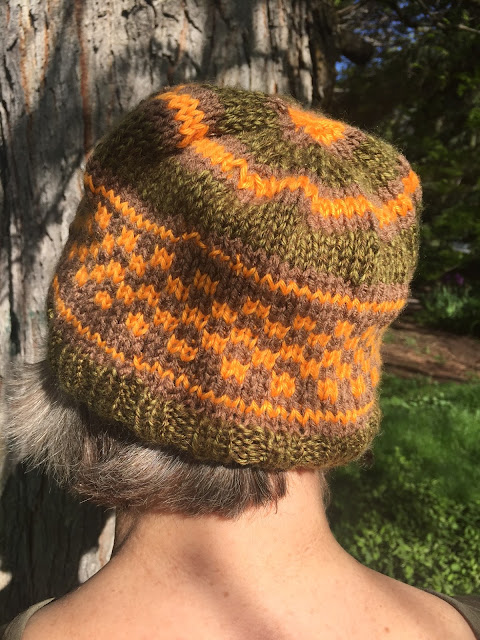 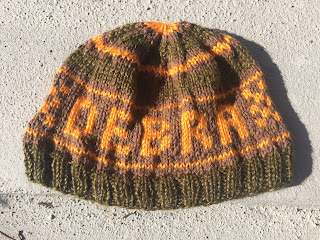 Apparently I need more reminders to keep me on track, so I knitted the ultimate reminder—a hat with my name on it in case I forget.

Hats are fun and fast to knit. I use them to experiment with colors and to draw pictures. There are hats in my shop inspired by visits to Canyonlands and Arches National Parks. I have knit hats for local colleges and high schools. There have been hats inspired by books and movies. My best-selling hats are the ones inspired by Space Invaders and other classic video games. My Space Invaders hats are on the Isle of Jersey in the English Channel and in Norway. A Pong hat went to Russia.

Do you need to be reminded of your name? Do you want to show support for a team or company? Do you need a hat unique to you? I take custom orders. Let me know.